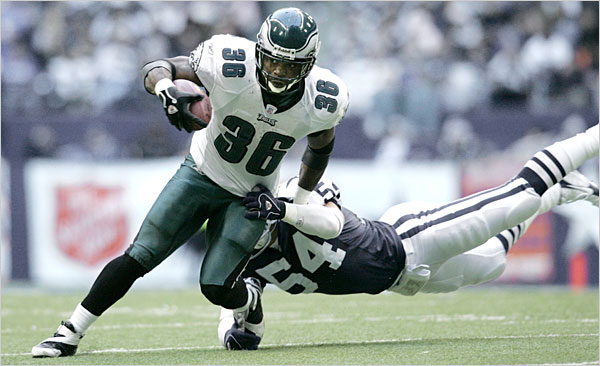 If healthy, Westbrook could be just what the Packers are looking for.

A day after we told you the Green Bay Packers were looking at running backs in the early rounds of the draft, it looks like they’ve expanded that search to the free agent scrap heap as well.

Though it’s unclear whether the Packers are serious enough to sign the 30-year-old veteran, two sources said Monday that the club definitely has shown interest.

This is sure sign the Packers want an upgrade, especially on third downs, behind Ryan Grant, despite expressing faith in Grant’s current backup, Brandon Jackson.

Westbrook was once a formidable weapon in the Philadelphia offense. He’s rushed for more than 1,200 yards twice in his career and has had more than 600 yards receiving four times. However, injuries have slowed Westbrook in recent years.

Last season, Westbrook missed eight games with two separate concussions and he’s never made it through a full 16-game schedule. There was speculation the concussions would force Westbrook to retire, but at 30 years old, he doesn’t appear ready to do that.

In order to sign Westbrook, the Packers would have to be satisfied with the results of his neurological tests as well as the health of his ankles of knees, which have sidelined him several times throughout his career. However, if his health is sound, bringing Westbrook aboard would be a low-risk move similar to the signing of Ahman Green last season.

There hasn’t been much interest in Westbrook on the free agent market and the Packers are unlikely to have to pay big money or offer much in guarantees. Conceivably, Ted Thompson could give Westbrook an incentive-laden, short-term deal and hope Westbrook provides a presence in the passing game the Packers haven’t had since, well, Ahman Green was in his prime.

The Packers were never going to go after someone like Chester Taylor or LaDanian Tomlinson, simply because they didn’t want to pay those guys. Taylor received a three-year $12 million deal with $7 million guaranteed from the Bears and Tomlinson got $5.2 million over two seasons with the Jets.

Westbrook is more likely to command $1 million per season plus incentives – the type of bargain contract Thompson salivates over.