Packers Insiders Gets A New Look… From Us

You know them, you love them… or at least tolerate them. They’re the Green Bay Packers’ Insiders!

As a single man they would be nothing, but together, they form a Voltron-like unit with one mission – kicking ass! Or maybe it’s Packers’ journalism. I don’t recall.

Actually, we heard a rumor Pelisero recently left the Green Bay Press Gazette, home of the Packers’ Insiders, so we’re not sure what this will mean for the Volton-like ass-kicking unit we mentioned earlier.

Where did Pelisero go? Well, he’s fucking your sister.

Anyway, that’s not important, at least to me. What is important is the Packers’ Insiders logo.

The old one made me laugh, so we’ve taken the liberty of updating it to one that truly signifies what a bunch of asskickers these guys really are. We also surveyed each of the writers to ask exactly what they were thinking at the time the photo for the logo was taken. 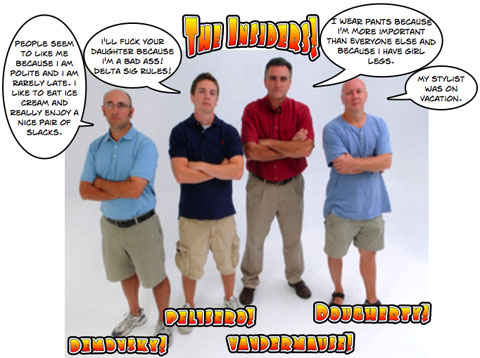 Previous Article
What Can the Packers Expect at No. 23?
Next Article
Packers Have Faith In Jackson, But It’s Unclear Why