Packers Have Faith In Jackson, But It’s Unclear Why 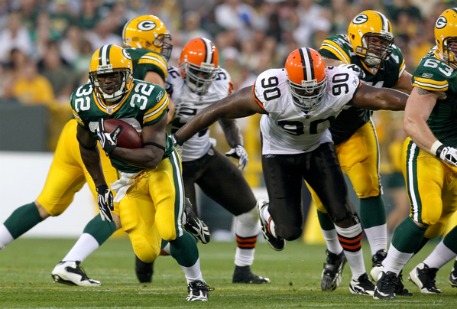 Jackson on one of his few carries.

No one will probably ever use the term dynamic to describe the Green Bay Packers’ running game under Mike McCarthy.

Ryan Grant is solid, but unspectacular. His backups have been a collection of nondescript guys who typically don’t see much time on the field and that goes for the Packers’ No. 2 runner Brandon Jackson, a former second-round pick.

In his three seasons in Green Bay Jackson has amassed 626 yards and four touchdowns on the ground. Those are pretty unspectacular numbers, especially when you compare them to some of the better backups around the league.

Chester Taylor, formerly with the Minnesota Vikings, ran for 338 yards in 2009 and 399 in 2008. The Dallas Cowboys’ Felix Jones ran for 685 yards last season and the Cowboys’ third-string running back, Tashard Choice, gained 349 yards and averaged 5.5 yards per carry. Mike Bell, formerly of the New Orleans Saints, racked up 654 yards and five touchdowns in 2009.

In some of these cases, the backups became starters temporarily when the No. 1 went down with injury, but that begs the question – would the Packers be able to run the ball if Grant went down?

It’s a question that hasn’t been answered. Grant has remained remarkably healthy during his tenure in Green Bay, missing only one game in three seasons.

The Packers are obviously comfortable with Jackson, for whatever reason, while observers – both professional and amateur – continue to suggest the team needs to upgrade the running game by at least adding a better option behind Grant.

Packers’ coach Mike McCarthy continues to stand by his man, though.

“I thought against Pittsburgh that his blitz pickup was as good as I’ve seen since Marcus Allen in the early ’90s,” McCarthy said. “And his confidence and everything from that game, I thought he took a big step and I’m hoping he can maintain that or take it further as we move on.”

Like most of the players Ted Thompson drafts, Jackson has taken time to develop and it’s hard to say what the Packers really have in him until Grant goes down or McCarthy decides to utilize him more. That said, it would be fair to assume if Jackson really was all that, McCarthy would find a way to get him on the field more often than he has.

As it stands, the Packers really don’t have the change-of-pace back a lot of other teams do. The Packers don’t have a big-time receiving threat out of the backfield.

The Packers certainly don’t have a guy who has demonstrated there would be minimal drop off if Grant went down with an injury.

So, while it’s swell that Jackson is getting better, maybe it’s time to think about picking up another running back that could offer some of these things. Eh, Ted?

Previous Article
Packers Insiders Gets A New Look… From Us
Next Article
Like the Green Bay Packers, We Fucking Rule!