Packers Get Lucky, Bulaga Falls To No. 23 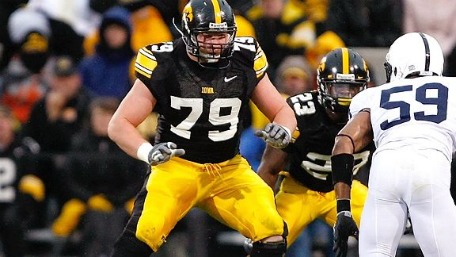 The Packers got their man.

With all the talk of trading up or trading down, the Green Bay Packers got lucky in the end with Iowa left tackle Bryan Bulaga falling to the team as they stood pat at No. 23.

There was word earlier in the day that Packers’ GM Ted Thompson was considering trading up to grab Bulaga, but that proved unnecessary. Bulaga was widely considered one of the top four tackles in this year’s draft, with some ranking him as the third best, while most projections had Bulaga going in the low teens.

Things started to deviate from the script at No. 8 when, who else, the Oakland Raiders made Alabama linebacker Rolando McClain the surprise pick. While McClain is a solid prospect, most people had the Raiders choosing a tackle and perhaps even taking a look at Notre Dame quarterback Jimmy Clausen.

The Buffalo Bills, who have two starting caliber running backs in Marshawn Lynch and Fred Jackson, followed suit by picking Clemson running back C.J. Spiller at No. 9. Jacksonville then grabbed Cal defensive end Tyson Alualu, who most observers consider a good player, but a reach at No. 10.

The 49ers, who were reportedly after Bulaga, then chose Rutgers’ left tackle Anthony Davis at No. 11. The Steelers, who picked at No. 18, were realistically the only team left standing between the Packers and Bulaga. The Steelers went with Florida center Maurkice Pouncey.

Bulaga isn’t an elite-level tackle prospect like Trent Williams, who went at No. 4 to Washington, or Russell Okung, who went at No. 6 to Seattle, but he should turn into a solid NFL starter. While he’s unlikely to open the season as a starter after the Packers re-signed Chad Clifton in the offseason, Bulaga should be a starter in 2011 or perhaps even as soon as Clifton suffers his first injury of the 2010 season.

NFL.com lists the 6-4, 314 lbs. Bulaga’s strengths and weaknesses as follows.

Strengths
Bulaga has great size and speed for the tackle position. Displays initial quickness getting back into his pass protection set and off the ball in the running game. Plays with sound technique. Is a cerebral player. Bulaga’s really competitive, plays until the whistle and will really finish his blocks. Productive in college.

Weaknesses
There are questions about his lower body strength to hold up at the point of attack and drive defenders backwards. Bulaga can be inconsistent with his footwork when asked to deal with speed rushers or move laterally. Is not a great knee bender.