Dream Of Acquiring Ted Ginn Shattered, But Fifth-Rounders Are Priceless 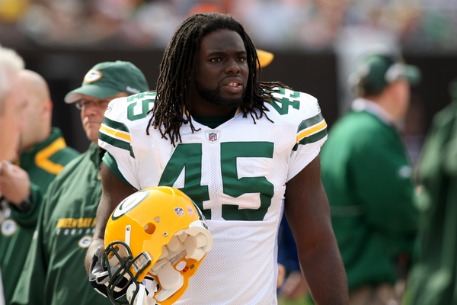 The only Ted Thompson fifth-rounder still on the team.

Just a quick note, since I did way too much research on the subject the other day in suggesting the Green Bay Packers and do-nothing general manager Ted Thompson could and should realistically look at acquiring Miami Dolphins’ return man/receiver Ted Ginn Jr. — Ginn was traded to the San Francisco 49ers today for a fifth-round pick.

I personally view a fifth-round pick as a high price to pay for Ginn and Thompson probably does too, but hey, the 49ers suck and sometimes shitty teams overpay for things they don’t need to overpay for. That said, the times Thompson has wowed anyone with his great, eye-popping fifth-round selections is exactly zero.

2009: Jamon Meredith, OT, South Carolina – a tremendous… oh, wait. Meredith didn’t even make the opening day roster and was plucked from the Packers’ practice squad by the Buffalo Bills, so, essentially, the Packers chose this guy for the Bills and drafting players for another team is always a solid strategy.

2008: Breno Giacomini, OT, Louisville – beaten out for the starting right tackle spot in 2009 by the force of nature that is Allen Barbre. It isn’t Giacomini’s fault he’s never played a game for the Packers, though. Barbe has played at an All Pro level, after all.

2007: David Clowney, WR, Virginia Tech – Clowney has grown into an NFL receiver. He’s caught 15 passes in his NFL career, 14 of which came last season. Of course, he’s done all of this for the New York Jets after failing to make the Packers in 2007.

2006: Ingle Martin, QB, Furman – Martin joined guys like Mark Brunell and Matt Hasselbeck as former Packers’ backup QBs who…. hold the phone! Martin is actually closer to former Packers’ backup QBs Blair Keil and Anthony Dilweg in that he didn’t play football in 2009. In the two seasons he was on an NFL roster, Martin threw exactly zero passes in a regular-season game.

2006: Tony Moll, T/G, Nevada – Pathetically enough, Moll has been Thompson’s most successful fifth-round pick to date. Moll actually started 18 games for the Packers over three seasons. Sure, he sucked ass in every single one of those games, but that’s at least something right? Thompson deemed Moll just valuable enough to trade for a special teams player prior to the 2009 season.

2005: Junius Coston, C/G, North Carolina A&T – Coston made the only seven starts of his career with the Packers in 2007 and he played just well enough during that campaign that never saw the field in his next two stops – the powerhouse Oakland Raiders (2008) and the mighty Detroit Lions (2008).

2005: Mike Hawkins, CB, Oklahoma – Hawkins has been…. well, who are we kidding? Hawkins has been shit, just like every one of Ted Thompson’s fifth-round picks. He lasted two seasons in the NFL, only one of which was with the Packers. He hasn’t played in the league since 2006.

So, you see, it’s completely obvious that Ted Thompson will choose a game changer or future All Pro in the fifth round of the draft, so why bother filling a need with an established NFL player like Ted Ginn?

Certainly, having draft choices gives the Packers the ability to trade those draft choices to move around in the draft. While that’s all well and good, the more you investigate Ted Thompson’s drafts, the less impressed you’ll be with what all of his late-round maneuvering has yielded.

While I still believe a sixth-round pick was a more realistic price to pay for Ginn, history tells us Thompson isn’t going to get shit out of the fifth round. So why not take a flyer on a guy who immediately makes the Packers better?