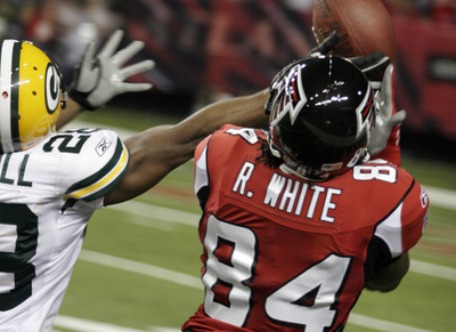 The familiar site of Ahmad Carroll getting beat.

2004 wasn’t exactly what you’d call a banner year for the Green Bay Packers in terms of personnel decisions, but I didn’t realize just how bad it was until I saw Football Outsiders’ six years later review of the 2004 NFL Draft.

Unlike all the jokers who try to rate a draft class before any of those players even play an NFL game, six years tells you just about all you need to know about a draft. In Football Outsiders’ review, the Packers were mentioned twice – for selecting players labeled as their position’s biggest bust.

The Packers – then being lead by coach/general manager Mike Sherman, who you could argue was the worst general manager in Packers’ history – chose Arkansas’ cornerback Ahmad Carroll (FO’s biggest defensive back bust) with the 25th overall selection.

Carroll entered the draft as a junior and I remember Sherman saying at the time Carroll would likely have been a top-five pick if he stayed in school all four years, so we all thought we were getting a guy with top-five talent. We were all very wrong.

Carroll played less than three seasons in Green Bay and was a starter for only one full season. He recorded three interceptions during that time and was known more for consistently giving up the deep ball and committing pass interference penalties – kind of like an early-day version of Jarrett Bush. The Packers released him during the 2008 season. After spending 2007 out of the league, Carroll played the last two seasons with the Jets, where he’s totaled 23 tackles and no interceptions.

Here are some of the guys the Packers could have had instead of Carroll: Darnell Dockett, Bob Sanders, Karlos Dansby, Chris Cooley and Matt Schaub. Unfortunately, the Rams took Steven Jackson one pick earlier than the Packers at No. 24, but then, Sherman was such a terrible personnel man, he probably would have passed on Jackson if he were available anyway.

The 2004 draft should also be remembered as the one where Sherman traded up at the end of the third round to grab Ohio State punter B.J. Sander (FO’s biggest special teams bust).

Sander was inactive his entire rookie season, after being beat out by a 40-year-old Bryan Barker. In 2005, Sander was handed the job and got progressively worse as the season went on, finishing 30th in gross average (39.2 yards) and 31st in net (33.9). He was released the following August and hasn’t kicked in the NFL since.

Sherman traded away the Packers second-round selection in 2004 to Jacksonville, but the team wound up with three third-round picks through various maneuvers. Unfortunately, Sherman’s other third-round picks weren’t any better than Sander.

Montana State cornerback Joey Thomas came at No. 70 overall and Clemson defensive tackle Donnell Washington, which Sherman also traded up to get, was picked at No. 72.

Thomas started one game in less than two seasons with the Packers, totaling 33 tackles and no interceptions. The Packers axed him six games into the 2005 season. He spent the next two years out of the league, before catching on with the Dolphins for six games in 2008.

Washington was even worse than Thomas. Not only was he injured his entire rookie season, he wasn’t active for a single contest in 2005. Washington was consistently overweight and he wasn’t motivated to do anything about it. The Packers released him prior to the 2006 season and he hasn’t played football since.

The team sat out the fourth and fifth round of the draft after trading those picks before finally getting something of value in the sixth round, when they landed Arkansas State defensive tackle Corey Williams.

Williams played four seasons in Green Bay and made the defensive line rotation his rookie season. He showed continual improvement and in 2006 Williams recorded seven sacks. In 2007 – his contract year – Williams notched seven sacks, three forced fumbles and an interception. The Packers dealt Williams to the Cleveland Browns the following February for a second-round pick.

The deal looks pretty good for the Packers today, since Williams’ career has gone in the tank. He’s totaled only 4.5 sacks in two seasons since signing a six-year $38.6 million contract.

The Packers final selection at No. 251 in the seventh round turned out to be the only guy left on the team in 2010 – Tennessee center Scott Wells. You could make the argument that Wells is the most valuable member of the Packers’ 2004 draft class, having started 68 games in his six years in Green Bay.

What’s sad is Wells has more starts with the Packers than the rest of the draft class combined.

If you’re keeping track at home, the Packers were two-for-six on their draft picks in 2004.

Three of the six selections are out of the league and four of the six have spent time out of the league. Only one player is still on the Packers. Two players played only two seasons in the NFL. Three played less than three. Four can be considered abject failures. None have made a Pro Bowl and only one finished 2009 as a starter.

How the Packers could have so grossly misjudged so many players is beyond me, but I think it’s fair to say Mike Sherman will never be an NFL general manager again.

Previous Article
Kampman Thanks Packers, Fans
Next Article
On The Clock – Packers