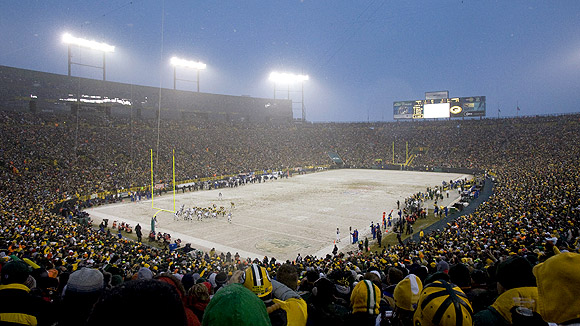 Soon you'll be able to watch TV while you're freezing your ass off at Lambeau.

What that means for the future of the Lambeau experience remains to be seen, but the logical first step seems to be highlights and stats on the current video boards and eventually replacing those with high definition boards and a new sound system.

“By a couple different measures, we’ve been judged to have – if not the best – one of the best game-day experiences in the league,” Murphy said. “So we don’t want to take away or cheapen that in any way. But technology is evolving so quickly that there’s some things we can do now that I think would really enhance the experience.”

Eventually, fans who watch the Packers at Lambeau could have something else to watch in their seats, as well. That something is Kangaroo TV – hand-held televisions that will allow people to watch other games or the NFL Network’s Red Zone channel.

Kangaroo signed a deal with the NFL in 2006 and already has a similar partnership with Forumla 1 in play. Race spectators can see other areas of the track, inside cars, get play-by-play, stats, etc.

Now, if they could just install a button so I could get a Miller Lite on demand.