Packers’ Improve From Within Rhetoric Getting Old 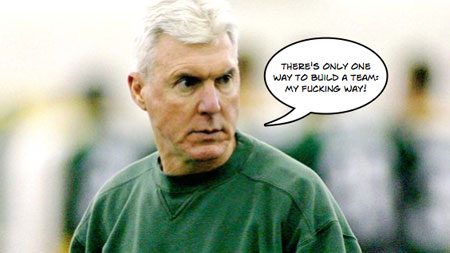 It’s been pretty well documented how badly the Green Bay Packers fared against top-flight quarterbacks last season. I’ll give it to you in four words: they fucking sucked ass.

This offseason the team has done little to address the deficiencies in that area. As usual, there was no outside free agent signings to speak of, so we’ve all just been sitting around with our thumbs in our asses waiting for the draft and wondering how the mastermind Ted Thompson is going to shore up the safety and cornerback positions, as well as the pass rush, with guys he drafts in the fifth round.

The situation isn’t dire and I don’t want to overreact, but really, some sort of outside talent that isn’t another rookie to make the Packers the youngest team in the league for the fifth year in a row would have been nice.

Instead, we get excuses about why the secondary was so terrible at the end.

“… I don’t think you can necessarily discount the fact that we played really good pass defense and overall defense in most other games. There are things that happen during the course of a game, you get off on the wrong foot, especially towards the end of a season, [and] you’re playing guys in sub packages that weren’t on your team to start the season,” Thompson said.

“I’m not trying to make excuses. … There just becomes a wearing away of the quality you put on the field.”

It’s true, the Packers were hurting in the secondary down the stretch, but isn’t that the general manager’s fault for not putting enough talent in that area of the team to begin with? I ask the same questions when the offensive line or the kicking game fails, both of which happy fairly often. And with the exception of punter, these are areas where the Packers brass is just so enamored with aging veterans and guys they’ve drafted that they remain status quo.

Cornerbacks Al Harris, Will Blackmon and Pat Lee were all on injured reserve by the end of the season and safety Atari Bigby sat out a big portion of the Packers’ playoff loss to the Arizona Cardinals. But do those players even make a difference if they’re healthy?

Maybe if they were ALL healthy, but injuries are a part of life in the NFL. If you look back earlier in the season you’ll notice Brett Favre and the Minnesota Vikings torching the Packers secondary. Both Harris and Blackmon played in the teams’ first meeting and both Bigby and Harris played in their second.

Surely this is one reason why the Packers will be looking for secondary help in the draft, but the team also needs a pass rusher opposite Clay Matthews, which is another reason why the defense got torched at the end of the season. And don’t forget about the need to protect their most valuable commodity’s backside with a serviceable left tackle…

My point is, the Packers only have one first-round pick, so they’re likely only going to be able to plug one of these holes immediately. If that hole isn’t left tackle, everyone is going to be raising holy hell when Chad Clifton goes down three games into the season and Aaron Rodgers is getting killed every other play.

So what do the Packers do? There’s nothing left on the free agent market to speak of, so even if Ted had a sudden change of heart about his ban on free agents who are worth a shit, that option is gone.

No, the Packers – and tell me if you’ve heard this rhetoric before – will improve from within. How? Well, let me hand it to the boy genius himself, Mike McCarthy, to explain.

“Pass defense will be an emphasis,” McCarthy said. “We haven’t really presented it to the team yet, but the two biggest things defensively (are) going to be tackling and handling adversity. Our adversity situations (last) year were not close to what they needed to be and did not match up to our production throughout our defense.”

Seriously though, both Thompson and McCarthy are right to a degree. The Packers had injuries and were forced to play a bunch of scrubs down the stretch in the secondary. Those guys, along with some of the regular guys, often tackled like they were playing Pop Warner and when they got beat once, they kept getting beat.

But here’s the thing – Thompson knows the talent level needs to improve and he’s done nothing about it to this point. Thompson is surely a solid talent evaluator and he usually fares well in the draft, but he’s also a disciple of Ron Wolf, who used both free agency and the draft to build the Packers into a perennial power.

That’s what makes Thompson so frustrating. The Packers always seems a year or two away. In a year where the team appears close to greatness they’re waiting around to build through the draft – again.

Will there be improvement from young players currently on the roster? There should be – that’s where McCarthy comes in. Will the draft make the Packers better? You’d hope so.

Are these things enough to make the Packers a legitimate Super Bowl contender or even serious competition to the Minnesota Vikings for the division title? I don’t see how.