Kapinos Won’t Be Back With Packers 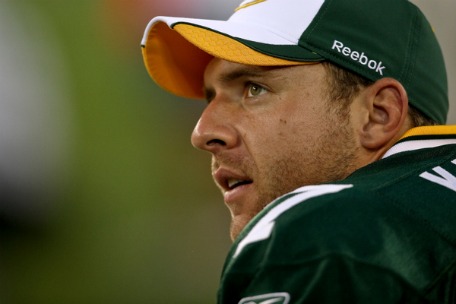 Another in a long line of Ted Thompson punting failures.

The struggles of Green Bay Packers punter Jeremy Kapinos and the special teams as a whole have been well documented.

Today, Kapinos found out he won’t return to the Packers in 2010 and to put it mildly, he’s pissed.

Obviously, Kapinos feels he being scapegoated (maybe he should call Mike Stock) as the reason for the Packers poor special teams performance.

“I assume somebody needs to be held accountable or sacrificed for the net and i20 (inside-the-20) production,” Kapinos told the Press Gazette.

“While I do admit I needed to improve and I was at fault for some of it, I won’t agree with anyone I was the lone liability. I think it’s very irresponsible to place the blame on one person. (Special teams) won’t improve if that’s the philosophy, I would hope there is a sense of accountability across the board.”

I’ll agree with one thing – the Packers special teams were atrocious as a unit in 2009. However, in his first full season on the job, Kapinos did little to prove he’s an NFL-caliber punter.

He finished 18th in the NFL in gross average (43.1), 31st in net average (34.1) and last in punts inside the 20 (15). The last two stats are telling and Kapinos has a point – those two stats can be indicative of poor coverage units, which I think it’s safe to say the Packers had in 2009 – but the bottom line is, the Packers need a better punter.

Perhaps that’s why the Packers spoke to at least two punters at the NFL scouting combine last week.

Currently, the only punter on the Packers roster is Tim Masthay, who was signed as a street free agent in January. Masthay was in camp with Indianapolis last year.