Tomlinson To Packers – Why It Makes No Sense 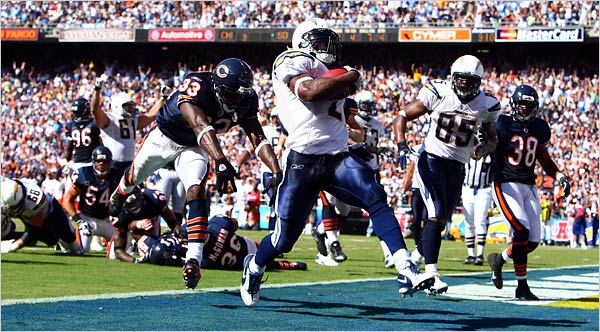 Tomlinson hasn't found a lot of running room like this lately

You don’t have to be a San Deigo Chargers’ fan to be a fan of LaDainian Tomlinson. The guy is not only likable, but he’s been one of the best players in the NFL since 2001.

If you’re a fan of the Green Bay Packers, you’ve probably had at least a fleeting visage of Tomlinson in the green and gold. Plenty of people around the Interweb have talked about how the Packers should sign Tomlinson, who was released by the Chargers on Monday.

Well, I’m here to bring you back to reality and tell you it makes no sense.

Tomlinson is at the end of his career. He’ll turn 31 this summer and as it’s been proven time and again, most premier running backs fall off the map after 30.

Ahman Green is a perfect example. At 29, Green gained 1,059 yards on 266 carries. At 30, he gained 260 yards on 70 carries, followed by 294 yards on 74 carrries when he was 31. For Green, the high number of touches he had each season being a workhorse back added up and injuries eventually robbed him of some of his power and burst.

Clearly, Tomlinson’s 3.3 yards per carry indicate he is no longer an NFL starter, so any delusions of Tomlinson coming in to replace Ryan Grant are foolhardy. Grant may not be the best back in the league, but at 27, he’s entering his prime and has a lot less tread on his tires than Tomlinson. He’s served only three seasons as a starter and in those three seasons, he’s gone over 300 carries in a season only once (Tomlinson went over 300 carries in seven of his nine seasons). Besides that, Grant averaged a healthy 4.4 yards per carry in 2009, while gaining 1,253 yards.

That leaves the prospect of Tomlinson coming in as a third-down back. It’s a role Tomlinson could embrace considering he’s said his main goal now is to win a championship, and the Packers should compete for one in 2010.

The question is whether the Packers would consider replacing 24-year-old Brandon Jackson, who has been the Packers third-down back, with Tomlinson. Jackson has been injury prone and hasn’t exactly torn it up in his three seasons as a member of the Packers. He’s totaled 626 yards rushing and 502 yards receiving in three NFL seasons.

At this point, it’s questionable whether Jackson is an asset to the Packers, but it’s hard to fathom general manager Ted Thompson dumping Jackson for Tomlinson considering Thompson continually assembles one of the youngest teams in the league. If anything, Jackson is more likely to be bumped by a draft pick.

Then there’s Ahman Green, who is an unrestricted free agent. Green is 33 and no better than the Packers third-best running back if he’s resigned, but is a valuable leader and still seems to be a serviceable short-yardage back. Although it doesn’t seem likely, Green says he thinks he’ll be resigned by the Packers. However, Tomlinson isn’t going to come in and be the Packers third back.

None of this addresses Tomlinson’s price, of course. Although there isn’t likely to be a huge demand for his services, Tomlinson is likely to be looking for $2-3 million per season. That’s a sizable price to pay for a third-down back who may or may not have anything left in the tank.

The Packers would be wise to spend that money to shore up another area of the team and look for another back in the draft.

Previous Article
Vikings’ Leber: Favre Will Be Back
Next Article
Packers Will Franchise Ryan Pickett