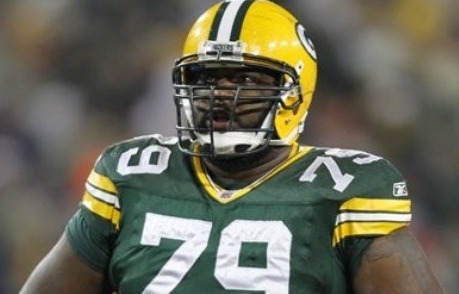 Pickett has been a lane-clogger up front for the Packers

Some interesting tidbits have come out about the Green Bay Packers free agent priorities in the past week. Although he’s clearly their top player without a contract for the 2010 season, safety Nick Collins is not at the top of the Packers’ list of players to resign.

According to the Journal Sentinel, the Packers No. 1 target at present is nose tackle Ryan Pickett, who we ranked third in our list of Packers free agents back in December.

There have been ongoing contract discussions between the Packers and Pickett’s agent, Kennard McGuire, for some time. There is hope on both sides that a contract will be reached in the next month, if not the next few weeks.

The Packers would be wise to resign Pickett, even though he’s 30 and even though they drafted nose tackle B.J. Raji in the first round of the 2009 draft. Simply, 330-pound defensive tackles don’t grow on trees and many players of Pickett’s stature have been successful well into their 30s. The Minnesota Vikings Pat Williams, who is 37, is a perfect example.

That’s not to mention Pickett is one of only five unrestricted free agents the Packers have this year. If he hits the open market, there will be competition for him.

Unfortunately, as of last week, the Packers hadn’t started negotiations with any of their other free agents.

Interestingly, the next two guys on the Packers’ list may be tackles Mark Tauscher and Chad Clifton. Although neither performed at a particularly high level this season, both were injury prone and on the wrong side of 30, are entering the twilight of their careers, the Packers seem to view them as an insurance policy.

“I like the job Mark did, and Chad when he’s healthy plays at a high level,” coach Mike McCarthy said. “That’s part of the discussion (General Manager) Ted (Thompson) and I have had and will continue to have. I like what our line looks like when Chad and Mark are in there, I make no bones about that.”

Both Tauscher and Clifton are unrestricted and the competition for their services on the open market will be minimal and possibly even non-existent. Still, the Packers have three holes to fill on the offensive line this offseason, and they don’t have proven players to do it, with possibly the exception of Jason Spitz, who also needs to be resigned.

T.J. Lang should be given every opportunity to win one of the tackle jobs, but the team currently doesn’t have another serviceable tackle. Do the Packers need upgrades over Clifton and Tauscher? Yes, but whoever those players might be, they will likely need time to develop.

As for the rest of the Packers’ free agents, it appears several won’t be back. The most likely to fall into that category is running back Ahman Green. A good possibility to join Green is defensive end Aaron Kampman and guard Daryn Colledge, whom the Packers may not tender, making him an unrestricted free agent after a subpar season.

There have also been rumors that safety Atari Bigby has fallen out of favor in Green Bay.

The Packers have until March 5 to sign their players with no competition. After that, things will get interesting.