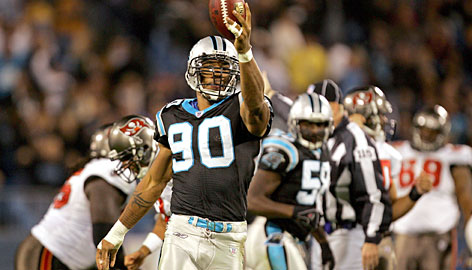 Peppers has something up his ass in relation to Trgovac.

We’ve connected Carolina Panthers defensive end and free-agent-to-be Julius Peppers with the Green Bay Packers on a few occasions. So have several other outlets, but it looks like Peppers has already crossed the Packers off his list of potential teams.

The National Football Post’s Andrew Brandt says there’s no chance Peppers will sign with Carolina or the Packers this offseason. This, of course, is a guy who swore he’d sit out last season rather than play under the franchise tender Carolina assigned to him. Peppers played every game for Carolina under the deal.

The reason for Peppers dislike of the Packers? Defensive line coach Mike Trgovac, who was Carolina’s defensive coordinator in 2008.

To put it conservatively, Trgovac is highly disliked by Peppers. I worked with Mike in 1999 with the Packers and found him to be a good person and coach, but Peppers feels differently. He’ll steer clear of Trgovac at all costs.

The Packers clearly need another pass rusher to compliment Clay Matthews, but despite all his talent, Peppers has a downside. In Green Bay, he would have had to convert from a 4-3 defensive and to a 3-4 outside linebacker, and we know how that worked out for Aaron Kampman. That’s not to mention Peppers can be a distraction off the field, doesn’t always play up to his talent level and would cost the Packers somewhere in the neighborhood of $10 million per season.

That doesn’t exactly add up to a guy Ted Thompson was going to run out and sign anyway, but in a year when their aren’t many pass rushers available it’s unfortunate that Peppers is already off the list.