Kampman Could Land in the Division 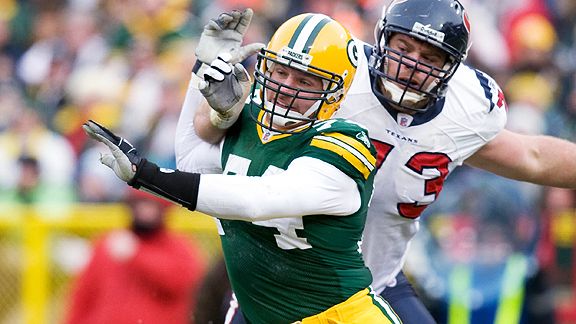 Kampman could be a fit in Chicago or Minnesota.

The Green Bay Packers’ Aaron Kampman is a free agent and we’ve speculated on several occasions why he’s unlikely to be back with the team for the 2010 season.

Chief among those reasons is Kampman didn’t fare well converting from a 4-3 defensive end to a 3-4 outside linebacker. For that reason alone, Kampman is likely to look for a team where he can play his natural defensive end position.

While we’re going to throw out the Detroit Lions because no one wants to play in Detroit, Kampman could realistically wind up becoming a member of the Chicago Bears or Minnesota Vikings, who both run a 4-3.

The Vikings are a less likely option, simply because Jared Allen plays Kampman’s left defensive end position and because they have a 25-year-old who registered 8.5 sacks at right defensive end, in Ray Edwards. Kampman is 30 and coming off major reconstructive knee surgery.

Still, as ESPN Milwaukee’s Jason Wilde noted, the Vikings did try to sign Kampman as a restricted free agent in 2005.

Perhaps more realistic is Kampman signing with the Bears, where defensive end Adewale Ogunleye is a free agent and at 32, unlikely to be re-signed. Couple that with the recent death of defensive end Gaines Adams and the Bears have a real need.

Yesterday, the Bears other starting defensive end, Alex Brown, lobbied for Kampman to come to Chicago.

“I would love to have Wale (Ogunleye) back, but I’m not sure if they’re going to go that road,” Brown said. “If not, Aaron Kampman would be pretty darn good. He plays hard and he plays with heart.”

Knowing how cheap the Bears are and that Kampman surely won’t command as much money as say, Julius Peppers, seems to indicate there may be a fit as well. On the field, the Bears certainly could use Kampman’s pass rushing ability – Ogunleye led the team with 6.5 sacks last season, followed by Brown’s six.

All that being said, there is a strong indication out of Green Bay the Packers want to re-sign Kampman. They question is, does he wast to re-sign with the Packers?