Another Ad For Lord Favre 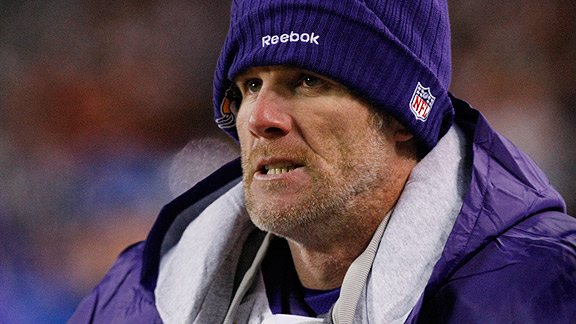 I am your overlord! Buy Wrangler jeans!

Maybe it’s the 49 years of ineptitude. Maybe it’s having never won the Super Bowl. Maybe it’s the inferiority complex instilled by the success of their eastern neighbor, the Green Bay Packers.

Actually, who am I kidding? It’s all of these things that make Minnesota Vikings fans who they are.

And so, you get shit like this. You all remember the idiotic billboard some Vikings fans took out for Lord Brett Favre urging him to come back for one more season with the Vikings. Well, now another idiot Vikings fan has taken out a full-page ad in Monday’s Hattiesburg American newspaper urging Favre to come back.

What’s that smell? You got it. It’s the stench of desperation.

“Oh, please Lord Favre, come back and save us from our years of suckitude. Come back and make us look like real football fans for another year. We love you Lord Favre!”

Actually, the ad doesn’t say that. It is reportedly an open letter to Lord and Savior Favre that ends with this.

“Brett Favre, thanks man. Rest up … then come on back. Sincerely, a Vikings fan.”

The ad was placed by Benjamin Nelms, a 39-year-old who designs cancer therapy products and lives in Madison. Yeah, Madison…

If you live in Madison, I highly encourage you to ferret this rat out and drive him either A. out of our fine state, or B. into Lake Mendota.

Nelms says he paid about twice what season tickets cost for the ad, which is a brilliant investment. And his hope?

“I don’t want to guilt him into coming back. I don’t want him to read it and say, ‘Oh, no,’ ” Nelms said. “But I hope that if he’s on the fence, this can be a piece of wind that pushes him back onto our side.”

Well, he got one thing right. The best path to take in this case is to feed Lord Favre’s giant ego.