Woodson Picks Up Another Award And Rex Ryan Is a Douchebag 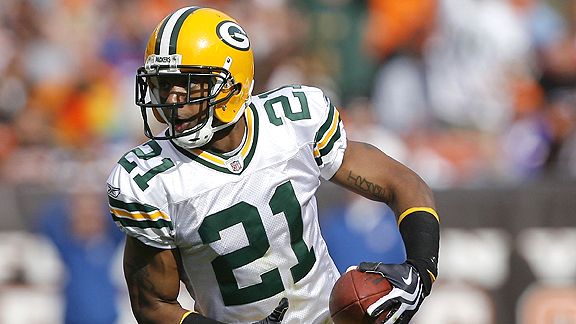 Green Bay Packers cornerback Charles Woodson won the NFL Defensive Player of the Year on Tuesday by a wide margin. On Wednesday, he picked up the Sporting News’ NFL defensive player of the year award, which is voted on by 636 players, coaches and executives.

New York Jets cornerback Darrelle Revis, who seemed to be Woodson’s biggest competition for post-season honors, finished fifth with 22 votes. Minnesota Vikings’ defensive end Jared Allen, who did next to nothing down the home stretch of the season, finished third with 94 votes.

Although Woodson clearly deserved the award, the final results make you wonder when the votes were submitted. There’s no way Revis should have finished fifth and there’s no way Allen should have been ahead of him if the full season was taken into account.

Then again, maybe other players in the NFL simply don’t like Revis and didn’t vote for him.

Speaking of people we don’t like – New York Jets coach Rex “Fatboy” Ryan just got a little more intolerable. If you’ve seen any of Ryan’s press conferences this season you know he’s brash, you know he doesn’t beat around the bush and you know he’s sometimes a complete moron – like week 15, when he thought the Jets were eliminated from the playoffs after losing to the Atlanta Falcons, even though the weren’t.

All of these things were annoying, much like his father Buddy Ryan, but Rex went a little too far when it was announced that Woodson beat Revis for defensive player of the year.

“I wasn’t going to comment on it, but I would like to congratulate the people that voted for Darrelle Revis. These guys obviously really know the game. And you’ve got to look at all the numbers, not just a number about this, or this stat or that stat.” Ryan sarcastically proclaimed, “A number I think is interesting would be eight. And no, that’s not the amount of touchdown passes Green Bay gave up against Arizona. That is the number of touchdown passes we gave up all season. And the biggest reason for that is Darrelle Revis.”

Well, first, you ignorant cunt, playoff performances aren’t factored into the voting for regular-season awards. Second, neither are team statistics.

So how about this, Rex? Why don’t you take that number eight, turn it sideways and jam it right up the hole on the backside of your bloated, brainless carcass? Or maybe even the one on your face – I can’t really tell the difference between the two anymore.

And if you want to talk about interesting numbers, here’s one for you to think about – two. The number of times your guy has failed to come close to beating Charles Woodson for a defensive player of the year award this week.