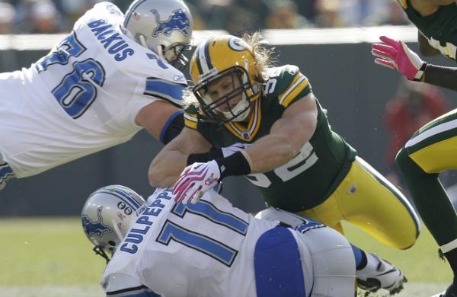 The Green Bay Packers have three deserving Pro Bowlers in Aaron Rodgers, Charles Woodson and Nick Collins, but they also have two guys that have a pretty good argument for being snubbed — running back Ryan Grant and outside linebacker Clay Matthews.

Let’s look at their arguments.

The running backs on the NFC squad are Minnesota’s Adrian Peterson, St. Louis’ Steven Jackson and Carolina’s DeAngelo Williams. Peterson and Jackson most certainly deserve to be on the squad. Jackson is first in the NFC with 1,353 yards. Peterson is second with 1,329 and leads the NFL with 15 touchdowns.

The questionable inclusion is clearly DeAngelo Williams. While Williams has had a good season, most of Grant’s numbers are better (NFC rank in parenthesis). Yards per carry rank based on players with 200-plus carries.

Williams’ yards per carry is certainly impressive, but he’s also lost three fumbles to Grant’s one, and he’s missed two games. You might argue that Williams missing two games only makes what he’s done more impressive, but then I’d ask you why Cedric Benson isn’t on the AFC roster. Durability counts. Factor in the fact that the Packers are 10-5 and the Panthers are 7-8 and Grant has a strong case.

Matthews, who was beaten out by Dallas’ DeMarcus Ware, Chicago’s Lance Briggs and Washington’s Brian Orakpo, has an even stronger case.

Ware is the most deserving of the group. He’s a consistent pass rushing force who has 11 sacks this season, tied for fourth in the NFC. He also has 56 tackles, an impressive five forced fumbles and he’s the heart of the 10-5 Cowboys’ 3-4 defense.

Briggs and Orakpo? Matthews is better than both of them.

Somehow Briggs was elected as a starter, even though he’s having a sub-par season. His numbers don’t look bad – 106 tackles, 2.5 sacks, 1 interception – but if you’ve seen Briggs play this season, you know he just isn’t making plays. Briggs has been banged up, but considering Brian Urlacher hasn’t played since week one, Briggs should have 20 more tackles than he does.

However, since Briggs was elected, let’s focus on Orakpo.

The numbers are similar, but Matthews didn’t become a starter until the fourth game of the season while Orakpo started from day one. Orakpo should get credit for being an opening day starter, but the fact that Matthews has achieved similar numbers in three fewer starts speaks to the impact he’s made.

Of Orakpo’s 11 sacks, four came in week 14 against the Raiders. They’re the only four sacks he’s had in the last six games. Over the last six games, Matthews has six sacks and they came in four different games.

Finally, I have to point out the fact that Orakpo plays in a 4-3 defense and he’s only registered 48 tackles. To give you an idea of what an outside linebacker’s stats should look like in a 4-3, take a look at Briggs, who has 106 tackles in a bad year.

Can someone tell me what I’m missing here?

Maybe it’s the joke, because that’s what choosing Orakpo over Matthews is — a joke.