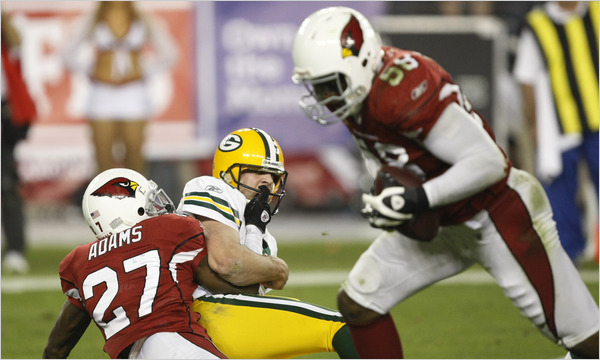 It was a playoff game for the ages, although Packer fans may not look back on it too fondly.

Kurt Warner and Aaron Rodgers put on a passing extravaganza, tossing for a combined 801 yards and nine touchdowns in the NFC wild card game Sunday night. But it was Arizona’s defense that came up with the win.

Cornerback Michael Adams sacked Rodgers in overtime, forcing a fumble that was recovered in mid-air by Arizona linebacker Karlos Dansby and returned 17 yards for a touchdown as the Cardinals outscored the Green Bay Packers 51-45 in the highest scoring playoff game in NFL history.

Rodgers, who started his first playoff game with a pick, flung his helmet to the sideline in disgust as Arizona rushed the field to celebrate.

“That’s probably one of the best games ever played in the playoffs,” Cardinals coach Ken Whisenhunt said.

It was a wild end to a high-octane game that revolved around the teams’ offenses. Warner had just two incompletions after three quarters, and the Cardinals didn’t punt for the first time until the fourth quarter. Rodgers recovered from an awful start to finish with an amazing 422 yards and four touchdowns.

But his two turnovers, and the defense’s inability to keep Arizona from scoring, largely negated Green Bay’s stunning second half comeback. The Packers were down 31-10 in the third quarter before mounting a furious rally that went into overtime after Cardinals kicker Neil Rackers missed a 34-yard field goal with 14 seconds left in regulation.

The Packers won the coin toss, and Rodgers lost the ball on one of the first plays of that opening overtime drive.

“It’s clearly one of the toughest losses I’ve been a part of,” Packers coach Mike McCarthy told the Green Bay Press-Gazette. “I’m very proud of our football team and fight. This is a hard game to swallow.”

Sunday’s game was almost the complete opposite of last weekend’s contest between the two teams. The Packers defeated the Cardinals 33-7 in that matchup, although Arizona rested most of its starters.

Unfortunately, many may say this game was lost by Rodgers on the last play. Or that the officials missed a facemask penalty on the Cardinals. But Green Bay wouldn’t have even been in that position (i.e. overtime) if the much-hyped defense, which came to the team’s rescue so many times during the regular season, had done its job and kept Warner and his Cardinals out of the end zone. Or if Mason Crosby had made that 54-yard field goal in the first half. Or if the offense had been able to score earlier.

There are a lot of “ifs” that will need to be looked at in the offseason. The good thing is there’s a lot of talent on this young team, and they will only improve as they get more experience. The Packers are headed in the right direction.