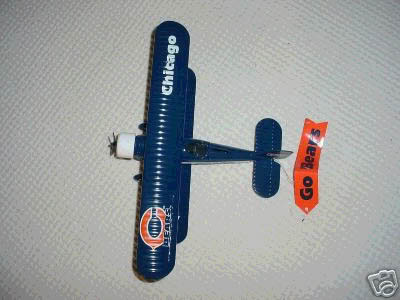 Maybe the Bears should consider a new plane.

The Chicago Bears are bad this season, but now we have confirmed that their ineptitude stretches beyond the field.

The Bears can’t get to Baltimore to play their game against the Ravens tomorrow. The team was supposed to leave Chicago at 10:30 Friday night. That didn’t happen.

The team sat on the plane for two hours before the flight was cancelled. According to a passenger, an announcement was made that there was a mechanical issue, and the team would need to change planes. Before that could happen, the window of opportunity to leave closed and the Bears arrived back at Halas Hall on buses at about 1:15 a.m.

If you haven’t heard, Baltimore and much of the East Coast is being pounded by a blizzard today – one that could leave up to 30 inches of snow on the ground. The storm is supposed to continue until tonight and possibly into Sunday morning, so no one knows when the Bears might leave Chicago.

With that being the case, I thought I’d offer this helpful suggestion to solve the problem.

Both the Bears and Ravens suck. The Bears season is over and let’s face it, even if the Ravens make the playoffs, they aren’t getting past the first round. So it’s simple – let’s just cancel the game, give both teams a loss and move on with our lives.

This solution will save the fine people of Chicago and Baltimore from watching two suck teams bumble around on the football field for three hours.

Previous Article
The Secret of the Packers’ Success
Next Article
Predictions: Packers vs. Steelers