Shanahan Wants to Coach the Bears 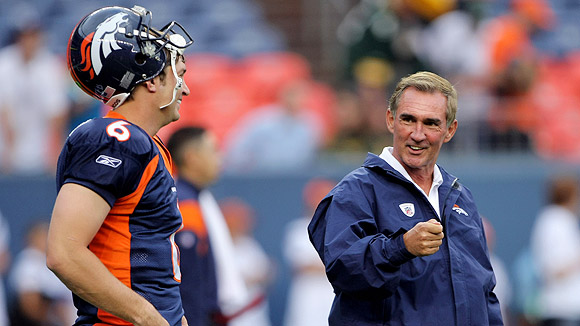 Hey Jay, remember when you were good?

Former Denver Broncos’ coach and Chicago native Mike Shanahan is “extremely interested” in coaching the Chicago Bears, according to ESPN.

Shanahan would be reunited with Bears’ quarterback Jay Cutler, who had two strong seasons under Shanahan in Denver, if he did take over in the Windy City.

“The job is really attractive to Mike,” a close friend of Shanahan told the network. “It’s home [with relatives of his, including his dad, in the Chicago area, and wife Peggy’s family still in the Bloomington area]. It’s a great challenge because that roster needs to be made over, and the one guy there to build the team around is the one guy he has already built a team around and with whom he has a tremendous comfort level, Jay Cutler.”

That’s decent news for the Bears, but not so great for current Chicago coach, Lovie Smith. It’s been surmised that Smith is done in Chicago (we tabbed Shanahan as a potential replacement earlier this month). The team has struggled to a 5-9 record and Cutler has been downright terrible at times, leading the league with 25 interceptions.

It’s easy to see why the Bears would be appealing to Shanahan, but the organization has two things working against them.

First, the Washington Redskins also want Shanahan and will probably be willing to pay him a considerable amount more money than the Bears, who haven’t exactly been known for their free-spending ways under the ownership of the McCaskey family. The organization has never hired a coach with previous head coaching experience and Redskins owner Dan Snyder is likely to put the full-court press on Shanahan once the season ends.

“Mike’s contention,” the friend said, “is, ‘Hey if I’m working with a good GM, I have no problem with that. I want to be surrounded by a good GM, good scouting department, and I would gladly take recommendations and execute your recommendations but ultimately, I would like the final say.’ If there’s a disagreement between the three or four people in the room, Mike would like to be able to say, ‘This is the guy I want.'”

The general manager and scouting department is where Chicago comes up short. A quick glance at the Bears’ current roster tells you Jerry Angelo and company have done somewhere between poor and FAIL! in recent years.

Perhaps it would be more realistic to bring in Shanahan in the dual role of coach and general manager. If Shanahan is going to make final personnel decisions, there isn’t a real need for Angelo. Unfortunately, or perhaps fortunately for the rest of the NFC North, Angelo is under contract with the Bears through 2013.

The Bears will owe Smith $11 million over the next two years if they dismiss him. The McCaskey’s would have to pay Angelo for four more years if they fire him. Add to that the approximately $7 million per season Shanahan is likely to command, and the picture looks like something your three year old drew with finger paint on a used napkin.

In a dream world – a Chicago Bears fan’s dream world – Shanahan is the Bears coach next season, but history and finance tell us that isn’t going to happen.