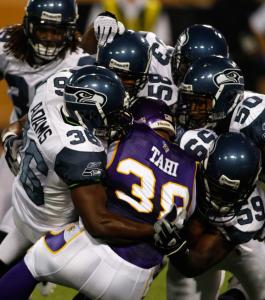 I hate to say this, but most fans of professional sports are idiots, which is why I hate the fact that fans have a say in which players play in the respective all-star games.

I should put a disclaimer here, because I don’t lump Green Bay Packers’ fans in with most sports fans. Their passion and knowledge is unrivaled in the realm of professional sports fandom.

However, as I said, most fans are just stupid. They have only a cursory knowledge of the league as a whole, most of them don’t pay much attention to what’s going on outside of their own cities, and the only knowledge they have of players from other teams is what they’re force fed on Sportscenter. Does that sound like someone who can form a reasonable opinion on which players are performing at the highest levels during a given season?

Not to me it doesn’t.

Exhibit A: The Houston Rockets’ Tracy McGrady would start for the Western Conference in the NBA All-Star Game if voting ended today. McGrady has played in one game this season – he scored three points in seven minutes on Tuesday – yet, he is the second-leading vote getter at guard in the west.

Exhibit B: NFL Pro Bowl balloting, where it looks like Minnesota Vikings’ fans have been stuffing the ballot box. Currently, there are 11 Vikings leading the Pro Bowl balloting at their respective positions, and Brett Favre isn’t one of them.

Thankfully, sanity has won out in at least one of the races, where New Orleans’ quarterback Drew Brees is the current leading vote getter at quarterback, but let’s take a look at some of the other slots.

At tight end, Atlanta’s Tony Gonzales is leading the 49ers’ Vernon Davis. Gonzales is having his usual great year with 788 yards and five touchdowns, but Davis has emerged as the best tight end in the NFC. He’s recorded 815 yards and 11 touchdowns.

There’s more ballot stuffing on the offensive line, where the leaders for each of the three positions are Vikings – Bryant McKinnie at tackle, Steve Hutchinson at guard and John Sullivan at center. How about someone from the Saints? Their line has given up an NFC-low 15 sacks and they are second in the NFC in rushing yards, with 1,806. Or maybe Carolina? The Panthers have rushed for an NFC-high 1,949 yards and a 4.8 yard average.

And here’s my personal favorite – the Eagles Asante Samuel is the leader at cornerback. Hello? Charles Woodson, soon-to-be defensive player of the year, plays cornerback.

I understand logic doesn’t play a role in any of this. It’s a popularity contest. People can vote as many times as they want. Most people who vote know little about the game – they just choose the name they’re most familiar with, or the guy that plays for their favorite team. That’s why you see a lot of players from good teams and the same names lead the balloting year after year, even if they don’t deserve to.

It’s also the reason why those of us who are serious about football pay more attention to All Pro teams than Pro Bowls. Hell, I don’t even watch the Pro Bowl, but it would be nice to see the most deserving players make it in.

Thankfully, the NFL has a percentage-based voting structure, where only 1/3 of the fan vote counts towards who makes the team. The players and coaches each get 1/3 of the vote as well, so travesties like Naufahu Tahi aren’t likely to end up starting the game.

I can’t say I wish fans were eliminated from the voting equation because the fans are the ones who buy the tickets and support this billion dollar business, but please people, have a little sense if you’re going to vote for an all-star team.

If you want to go stuff the box for the Packers, feel free to do so here. Voting ends Dec. 21.