Signs Point to Clifton and Tauscher at Tackle

After Aaron Rodgers was sacked six times against the Minnesota Vikings, it was no surprise to discover that the Green Bay Packers might be considering a change on the offensive line.

“Mark Tauscher had a lot of work today with the ‘1s’, so looking at Mark at the right tackle position. He took the majority of the reps, and Chad Clifton looked healthy today. So really see how Chad responds tomorrow from today’s practice. Hopefully they’ll both go through the padded practice tomorrow and we’ll see where they are,” McCarthy said.

“No substitute for experience, and Mark Tauscher and Chad Clifton have a ton of it. You see that just in the practice today, just some of the things that they do. Anytime you add experience to your group, it’s definitely a benefit.”

Barbre has made a lot of glaring mistakes this season, but he’s only in his first year as a starter. Meanwhile, the 32-year-old Tauscher hasn’t played a football game in almost a year, after tearing his ACL last December.

On the other side of the line, Lang has started two games this season and played in another. He played well against Cleveland and in limited action against Minnesota the first time, but allowed three sacks to Jared Allen on Sunday. Clifton, who has been injured for most of the season, hasn’t played well since 2007.

McCarthy is right when he says that Clifton and Tauscher bring valuable experience to an offensive line that has given up a league-leading 31 sacks this season, but at what price?

Are Clifton and Tauscher a substantial upgrade over Lang and Barbre? I would argue that they aren’t, in which case the textbook for Coaching 101 says you go with the the young guys, let them develop and be better off for it down the road.

Barbre may never be anything more than dead weight on a roster, but Lang has real potential. The move to start Clifton and Tauscher reeks a little of desperation if you ask me.

We asked readers (link) earlier this week who they would like to see start at the tackle positions for the Packers. The results (as of 10/4) are as follows. 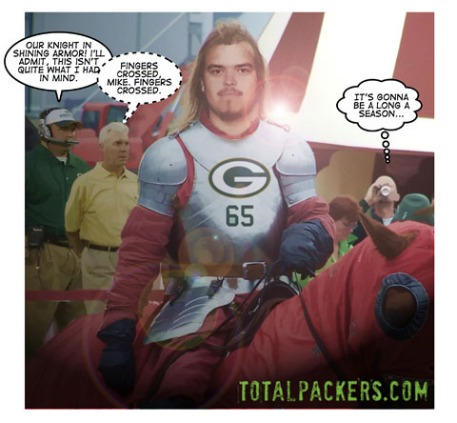 Mike McCarthy Spoke with ESPN About Leaving the Packers