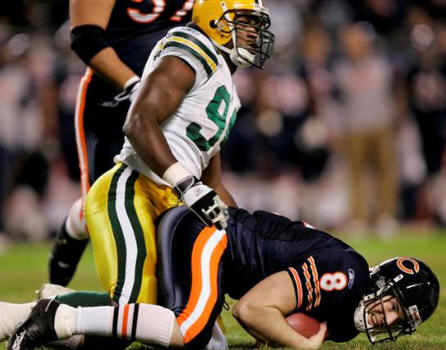 Grossman in a familiar position

Chalk this one up to embarrassing things my pushy parents say.

Except in this case, the “child” is 29-year-old former Chicago Bears quarterback Rex Grossman. And the parent is his dad, Dan, an ophthalmologist from Bloomington, Ind., who came out swinging Monday against his son’s former team. The elder Grossman essentially blamed the Bears’ organization for Rex’s failures when asked to compare the team’s current offensive woes with QB Jay Cutler to his son’s issues in Chicago.

Cutler, acquired from the Denver Broncos for QB Kyle Orton in the offseason, has tossed 17 picks in nine games this season, including five in the Bears’ latest loss to the San Francisco 49ers last Thursday night. The defeat puts Chicago at 4-5 on the season and virtually eliminates any hope for the playoffs.

Rex Grossman had a 19-11 record as a starter for the Bears, and led the team to the Super Bowl in the first full season he played (2006). He also threw 20 interceptions in 2006, along with his 23 touchdown passes, and was let go in 2008. The younger Grossman is currently the backup to Matt Schaub in Houston.

There’s no question that Rex Grossman’s downfall was not his fault alone. The Chicago Bears have historically been unable to surround their quarterbacks with elite offensive weapons. There’s a reason Sid Luckman still holds many of the Bears’ passing records from championship seasons in the 1940s. Jim McMahon was only able to win a Super Bowl in the ’80s because of one of the greatest defenses in NFL history.

But despite Dan’s ascertation, Chicago Tribune columnist David Haugh says the Bears’ handling of Rex Grossman was more about bad judgment than bad intentions. Chicago tried to give Rex the proper tools to succeed, but those tools were faulty.

And here’s a question. Does Rex Grossman really need his dad to fight his battles? And, more importantly, how does this look to Rex’s current teammates and Texans’ management?

I’m willing to bet not too good, especially after ditties like this one:

“What’s amazing to me is, here we go again with Jay Cutler. He came in and he was going to be the franchise quarterback and lead the Bears. I heard some people say they were going to the Super Bowl this year. And here we are, back in the situation where … because the team is not really built around a passing game, he has struggled. I don’t really blame it on Jay Cutler.

You know this young man can really play the sport and that position. It borders on the ridiculous. And the media wants to continually rip the player. And they are missing the point. It’s not the player. It’s the organization.”

Dan Grossman goes on to say the constant booing and criticism in Chicago traumatized his son, and that teams ignored him in the offseason because of “all the baggage he had to carry coming out of Chicago.” Dr. Dan also dutifully informs coaches, players, fans – hell, everyone I guess – that the NFL is a passing league and “has been for 20 years.”

And for a team to be effective at passing, in my opinion, you have to build your offense around your quarterback. You have to commit to the quarterback: ‘You’re our guy.’

You don’t bring your quarterback in and say: ‘We’re going to get off the bus running. But on third-and-10, you’ve got to come through for us now!'”

If Rex Grossman had said some of the things dear old Dad did, it would have been one thing. But his father’s comments not only opened Rex up to new ridicule in the media and among fans, they’ve cast another shadow over his stagnant career.

Time to cut the cord, Rex. Before it’s too late.