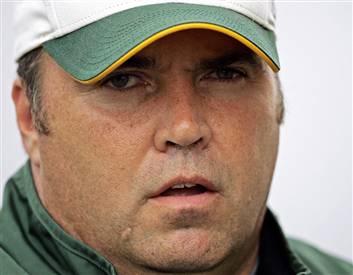 This makes me sick, although we will probably never fully know what happened.

The Green Bay Packers fired a 20-plus year, part-time grounds crew employee because he allegedly told Packers coach Mike McCarthy, “don’t lay an egg,” before the team’s second matchup with the Minnesota Vikings.

The employee, 53-year-old Mike Wood, says what he actually yelled to the coach was, “Hey coach, let’s get the boys ready to kick some butt this weekend.”

The incident happened on October 29. Wood was fired on November 1. On that day, the following exchange took place, according to the Journal Sentinel.

Wood said Allen Johnson, the team’s fields manager, approached him. “What did you say to McCarthy?” he asked.

Wood said he repeated what he had told McCarthy. Wood said he was told that McCarthy thought he heard him make a comment along the lines of “don’t lay an egg” in the game.

“I’m telling you, I had no knowledge of that,” Wood said he told Johnson.

“If you didn’t say it, who did?” Eisenreich asked Wood.

The next thing Wood knew he was being escorted from Lambeau Field and told he was out of a job. “Allen said to me, ‘Woody, we can’t have that stuff. We have to let you go.’ ”

The Packers have since released this statement.

“The organization has standards of conduct that apply to all employees, full-time and part-time, in order to maintain a respectful workplace. Mr. Wood’s supervisors determined he made an inappropriate comment, and he was relieved of his duties.”

It’s good to see McCarthy rules the Packers grounds crew with an iron fist. I wonder if he’s ever thought about doing the same with the football team he supposedly coaches.

McCarthy, of course, would go on to lay an egg in the Vikings game. Whether Wood’s version of the events are correct or McCarthy’s are correct, I really don’t care.

I’m appalled the guy would be fired for either remark. Is McCarthy that sensitive? “Don’t lay an egg” is what gets him riled up and hurts his feelings? He better hope I never get a job at Lambeau Field, because I have a few choicer phrases for him than “don’t lay an egg.” I would make him curl up in a ball, stick his thumb in his mouth and cry for his mother, if “don’t lay an egg” got to him.

Now we know two things for certain about Mike McCarthy.

1. He can’t coach football for a damn.

Previous Article
A Tale of Two Teams
Next Article
A Glimpse Of The Future? Brad Jones Will Start Against Cowboys