Trade Rumors Around the NFC North 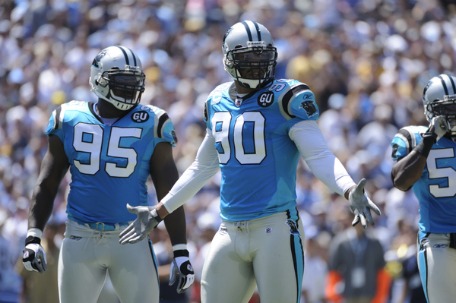 The NFL trade deadline is Tuesday, and while there are very few in-season trades made in the NFL, that doesn’t stop people from speculating about what could or should happen.

The Green Bay Packers have been linked to several names, but more on that in a moment.

The most persistent rumor revolving around any NFC North team is the pairing of the Chicago Bears and Terrell Owens. Thing is, it’s probably just that – a rumor, speculation, someone talking out loud and someone else running with it.

The Bears could use a playmaker like Owens at the receiver position. He has the experience and size the Bears lack at receiver and would be the team’s best route runner. Owens’ current team, the Bills, aren’t going anywhere this season and will likely be in rebuilding mode again next season, so a deal would make sense.

Still, for a number of reasons, the deal isn’t likely. According to Pro Football Weekly, the Bills don’t want to trade Owens and Owens doesn’t want to be traded. It’s also been pointed out that the Bears showed no interest in Owens when he was a free agent this past offseason.

We’ve all heard how Marty Booker and Brandon Lloyd took away valuable reps from Earl Bennett in 2008; wouldn’t Owens be doing the same thing to Bennett and Johnny Knox in 2009?

Despite all that, reporters are still asking Chicago quarterback Jay Cutler about the possibility of adding Owens. Cutler has been mum on the subject.

The Packers are the only other team in the division that may explore a trade. Minnesota has no glaring weaknesses and Detroit is a young team that has no reason to make a move.

The Packers have been linked to the Carolina Panthers defensive end Julius Peppers for some time.

Peppers would help bolster a Packers pass rush that has been anemic so far this season. Peppers could move to outside linebacker in the Packers scheme, possibly replacing Aaron Kampman, who may be on the trading block as well.

The problem with trading for Peppers is that he is playing on a one-year franchise tender. If the Packers didn’t negotiate a contract extension with him during the season, there’s a strong chance he’d walk in the offseason, when he will surely want a huge long-term contract in the neighborhood of what Albert Haynesworth got from the Washington Redskins ($41 million guaranteed). Anyone who knows Packers GM Ted Thompson, knows there’s a pretty slim chance any of this will happen.

In more baseless speculation, Mike Florio takes a look at 10 trades that should be made.

Number two on the list is St. Louis Rams running back Steven Jackson, who is wasting away playing for one of the worst teams in the league.

With the Rams more than a few years away from contending, Jackson will be used up before they’re ready to make a move up the standings. So why not get what they can now for Jackson?

Though most contenders have guys who can move the chains, the Packers could really use him.

Number six on the list is simply “Packers should trade for a tackle” – something that would make a lot of sense in light of the offensive line’s struggles.

The Jaguars signed Tra Thomas in the offseason, before taking Eugene Monroe and Eben Britton on the first day of the draft. Thomas is part of the rotation in Jacksonville; in Green Bay, he’d instantly start on the right side or the left. So the Packers should call the Jags, and the Packers should be willing to give up much as a fourth-round pick for him.

If the Packers are feeling especially frisky in this regard, they should call the Browns and find out whether the fire-sale mentality that sent Kellen Winslow to Tampa Bay and Braylon Edwards to the Jets extends to left tackle and Wisconsin native Joe Thomas.

The Browns are unlikely to trade Thomas. He’s a franchise left tackle and those are a lot harder to find than a tight end or a wide receiver.

Honestly, it’s unlikely the Packers will make any moves. Thompson places a premium on draft picks, which is what a trade of this caliber is likely to require. And even though adding Jackson or Thomas would make a lot of sense, Thompson has never traded for an established veteran since he’s been the Packers GM.

The Packers are more likely to pick up another team’s castoff to add depth, such as safety Clinton Hart, who was just released by the San Diego Chargers.

Hart isn’t a game changer, but has been a starter in San Diego since 2007 and would give the Packers additional depth behind injury-prone Atari Bigby.

Expect a lot more speculation in the coming days, but don’t be surprised if nothing happens at all.