The Best of Minnesota Vikings Humor

In the continued anticipation and build up to the Yarn in the Barn (that being the Green Bay Packers versus the Minnesota Vikings on Monday Night Football), we give you the best Vikings’ jokes, put downs and nonsense, all of which were submitted by readers.

We hope you enjoy, because you’re probably going to need them to help you combat all the Minnesota Vikings’ fans idiocy.

A special thank you to everyone who submitted jokes.

Q: What’s the difference between a porcupine and the Metrodome?

Q: Four Vikings are in a car. Who’s driving?

Q: Why do the Vikings have purple uniforms?

A: Because that’s what happens when you choke. You turn purple.

submitted by Jon from Superior, WI

Q: What do Vikings fans use for contraception?

Q: What’s black and blue and doesn’t like sex?

A: The 12-year-old boy in Brad Childress’ trunk.

Q: Why should Packers fans be happy about having Mike McCarthy for a coach.

A: Because Brad Childress was the alternative.

Q: What do you call a Viking with a Super Bowl ring?

Q: Why doesn’t St. Paul have a professional football team?

A: Because then Minneapolis would want one.

Q: How many Vikings does it take to win the Super Bowl?

(Sung to theme from Gilligan’s island)

The boats turned around and went back home
The authorities came aboard
But fear not friends, ’cause all’s not lost
The Vikings finally scored!

Here were a couple of the replies I received when I asked people to submit their best Minnesota Vikings joke, which I thought were pretty funny by themselves.

Is there a bad Vikings joke? – from bvpudgiemom

Hahahahahahaha – the Vikings are a joke, themselves! – from Jesse

Along the same lines, here are some insights that you might want to point out to your Vikings friends.

Lastly, we noticed earlier this week that the turds at Deadspin are going to be attending Monday night’s game. We only bring this up because Deadspin is a pretty damn funny site. And we only say turds, because their football guy, Drew Magery, is a scumbag Vikings’ fan.

So, in honor of Drew attending his first meaningful game, perhaps… ever, we made up a quick comparison of Vikings’ and Packers’ fans with yours truly and Big Drew. I’ll let you decide who you’d rather be aligned with… 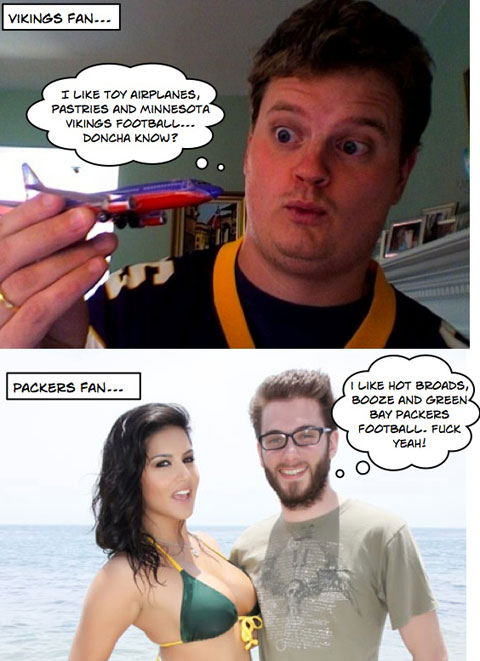 Previous Article
Get To Know A Viking: Bizarro Brett
Next Article
It’s Favreday!