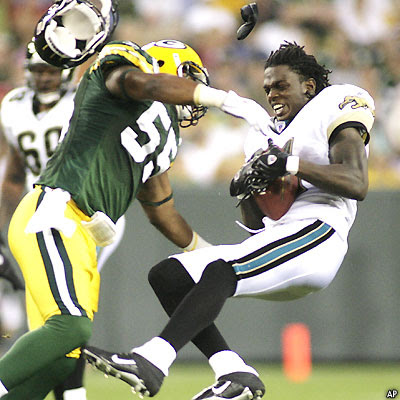 The chatter is getting louder with the NFL trade deadline looming tomorrow and the Green Bay Packers are part of it. Whether that results in any deals remains to be seen – Packers GM Ted Thompson isn’t known for his splashy moves – but there are some things to keep an eye on.

The Journal Sentinel’s Greg Bedard mentioned briefly, yesterday, that Packers linebacker Desmond Bishop could be on the block. Bishop can’t seem to get on the field for the Packers because he’s stuck behind Nick Barnett, A.J. Hawk and Brandon Chillar on the depth chart.

When asked, Bishop said he wouldn’t mind a change of scenery if it gets him some playing time.

“It crossed my mind,” Bishop said. “I didn’t know the deadline was Tuesday. I thought about it. Shoot, if anybody has reason to want a player, I wouldn’t oppose it.”

Bishop has only six tackles on the season, but that’s largely because he can’t get in the game. Meanwhile, starter A.J. Hawk has only 23 tackles, and had zero against Detroit on Sunday. Hawk is losing playing time to Brandon Chillar, which he should be. Hawk is a liability in coverage and while he’s fundamentally solid, isn’t a playmaker. Hawk has posted zeros in the following categories on the season – sacks, forced fumbles, fumble recoveries, interceptions.

The Packers should be looking to trade Hawk. The team could move Chillar, who already plays more snaps than Hawk, into the starting lineup, and get Bishop on the field where he has shown a knack for making plays. It’s ridiculous that the Packers aren’t playing Bishop, and I’m not alone on this one. The Packers will get more for Hawk in a trade than they would for Bishop (possibly a third or fourth for Hawk, and a fifth or lower for Bishop seem likely).

And hey, guess who’s in need of a linebacker? Our old friend Andy Reid and the Philadelphia Eagles, who are without starting middle linebacker Omar Gaither. In fact, the Eagles are so desperate for a linebacker they brought Jeremiah Trotter out of retirement earlier this year. Trotter hadn’t played a down of football since the 2007 season.

Reid told the Philadelphia media that the Eagles are looking. Receivers Reggie Brown and Kevin Curtis and quarterback Michael Vick are all likely available. Those names probably won’t appeal to the Packers, but remember that receiver and returner Jordy Nelson suffered a bruised knee on Sunday and is likely to miss at least a few weeks.

If the Packers make a move with one of their linebackers, expect Bishop to go. For whatever reason – perhaps their unwillingness to admit a mistake – the Packers seem to feel a need to keep sending Hawk out with the starters.

Another Packers trade rumor that has been speculated about revolves around outside linebacker Aaron Kampman, who hasn’t taken to the 3-4 defense. Although we’ve heard whispers as recently as today that Kampman may still be available, it’s looking unlikely he’ll be traded before tomorrow’s deadline, and the reasons are numerous.

You can start with the fact that Kampman registered a sack yesterday in the Packers win over the Lions, bringing his total to two on the season. No, that isn’t a good total five games into the season, but Packers defensive coordinator Dom Capers put Kampman in a 3-point stance on several plays on Sunday. It’s the first time Capers has allowed Kampman to play from his natural down position this season, and the results were apparent. In addition to the sack, Kampman hit the quarterback five times.

Secondly, the Packers aren’t likely to give up on a guy who is third in the league in sacks over the past three seasons five games into the transition to a new defense. Pass rushers like Kampman don’t grow on trees. As Kampman continues to adjust to the defense and Capers continues to adjust the defense to Kampman’s strengths, the results most certainly should improve.

All of this makes it likely the Packers will play this season with Kampman and evaluate the situation afterwards. Kampman’s contract is up, but the team has the ability to use the transition or franchise tag on him. If the Packers decide Kampman isn’t a fit in the 3-4, they can trade him in what will likely be a high-demand market. If he does improve, the Packers can sign him to a long-term deal. Waiting until the offseason to make a decision makes a lot of business sense.

Sure, the Packers have assets, but they also have needs. Last week, we looked at players who could fill those needs, and there are some updates to follow.

First comes St. Louis Rams running back Steven Jackson. The Packers would love an upgrade over Ryan Grant and Jackson makes sense because St. Louis is rebuilding. The problem with any potential deal is the salary cap. If the Rams traded Jackson, his bonus money would accelerate and count against this year’s salary cap. St. Louis is tight against the salary cap, making it nearly impossible for them to deal Jackson until after the season.

Second is Cleveland Browns left tackle Joe Thomas, who could fill a gaping need for the Packers. I’ve said before, this deal is highly unlikely. Thomas is a franchise left tackle and the Browns would be foolish to deal him. Still, Pro Football Weekly says Thomas’ name is being discussed.

While they have already publicly denied rumors that they would consider dealing QB Brady Quinn, who recently put his suburban home up for sale, or hot-shot return specialist Josh Cribbs, we hear there are a number of interesting players who are drawing interest, led by former first-round OT Joe Thomas, a Wisconsin graduate who could be a very attractive fit on a Packers offensive line that has surrendered a league-high 25 sacks this season. It’s worth noting that the Packers gave up five sacks Sunday, and veteran OLT Chad Clifton reinjured the right ankle that forced him to miss the team’s previous two games.

Such a move still seems doubtful. Thomas would cost any team a first-round pick and probably a player. Is he worth it? Yes, but I have a hard time envisioning Ted Thompson pulling the trigger on such a deal.

What would seem more obvious is going after Jacksonville Jaguars tackle Tra Thomas, who is playing in a rotation. We discussed this move last week, but unfortunately, talk has been quiet.

More as the deadline approaches.