Packers Game Against the Browns Just Got Easier 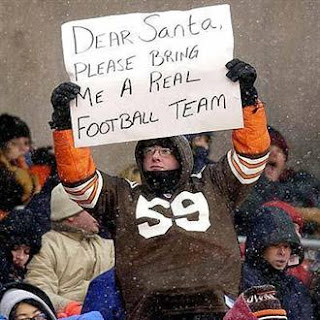 The Green Bay Packers are playing the Cleveland Browns this weekend.

I thought I’d point that out because no one is really talking about the game, and with good reason. The Browns rank 31st in the league on offense, ahead of only the Oakland Raiders and superstar quarterback JaMarcus Russell, where they average 240 yards per game. If it’s possible, they’re even worse on defense. Cleveland ranks last in the league, giving up 407 yards per game. It’s wonder they have a win (a flashy 6-3 triumph over the Buffalo Bills).

It could be argued that the Browns are the worst team in the NFL, and since the Raiders inexplicably won last weekend, I would probably make that argument.

So, as I mentioned before the Packers played the Detroit Lions, the team is about to get healthy simply because of their weak schedule.

The Browns on the other hand, are not healthy. In addition to having no place on a football field that includes another NFL team, several members of the Browns have come down with the flu this week – 12 players, to be exact. Anyone who’s had the flu knows it takes at least a few days to start feeling like a human being again, which is not a good sign for the Browns.

Whether this motley crew can play on Sunday remains to be seen – we suspect they’ll be shot up with vitamins and trotted out on the field – but the fact remains that they’re missing valuable preparation time.

“It’s a cause of concern, especially when guys have to be here to get the installation, get what we’re supposed to do this week. It kind of sucks really, because guys are missing a lot of information because they’re out,” linebacker David Bowens said.

So, you can probably expect a bunch of missed assignments and some crappier-than-usual play from the Browns on Sunday, if that’s possible.

The Packers are seven point favorites in the game and it’s remarkable that number hasn’t increased. Of course, those who like to lay the occasional wager are probably betting the Packers are overlooking the Browns in anticipation of their matchup with Brett Favre and whatever team he plays for, the following week. Even though the Browns are in the NFL’s JV division this year, that would be a mistake.

Still, even if the Packers are overlooking the Browns, they should win by about 65 points on Sunday.

Hopefully, they won’t get whatever infection the Browns have, whether it be the one that causes the flu or the one that makes you stink up the NFL.

Maybe the Browns should be quarantined for the rest of the year.