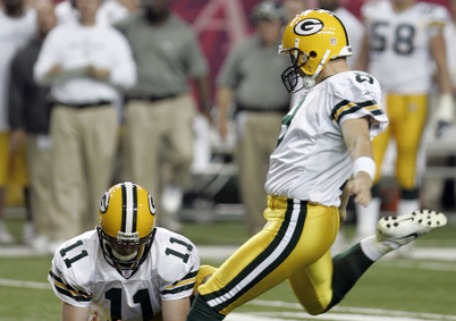 Ryan Longwell when he was relevant.

If anyone knows what Minnesota Vikings quarterback Brett Favre is going through this week as he prepares to return to Lambeau Field for the first time since signing with the purple and gold, it’s teammate Ryan Longwell.

Longwell returned to Lambeau as a member of the rival Vikings in 2006 after spending his first nine seasons with the Packers. Fans showered Longwell with boos, even though the Packers didn’t offer him a contract when he became a free agent that year. Longwell is still Green Bay’s career scoring leader with 1,054 points.

Longwell is curious to see the reception Favre receives Sunday.

“It’s going to be different for him going into the visiting locker room,” Longwell said. “I remember my first time, I had never even been in the visiting locker room. I don’t know if Brett’s ever been in there. The beauty of my first game, and it will be for Brett, is that once the game starts, it’s just a game. But I’m as curious as the next guy to hear the crowd reaction to him.”

Sunday’s contest will also have special meaning for Longwell. It will be his 200th career game. Now 35 and in his 13th season, Longwell is tied for second in the NFL in scoring, with 60 points. He’s made 59 of 61 field goals within 45 yards since joining the Vikings and kicked seven game-winning field goals.

Longwell credited Vikings long snapper Cullen Loeffler and holder Chris Kluwe for much of his recent success. He also goes on to say that while he’s proud of what he did in Green Bay, he appreciates his new home with the Vikings.

“We still pinch ourselves with what we’ve been able to experience here just with the city and this football team and the playoffs last year and being part of Brett coming back, and some of the kicks I’ve been able to make over the last four years,” he said. “I feel very blessed to be here.”

Whatever. I’ll boo both Longwell and Favre on Sunday. And, judging from what I’ve read in Packers blogland this week, so will a lot of other Green Bay fans. See, I respect both of these guys for their contributions to the Packers organization, but they are returning as members of the opposing team. And the Minnesota Vikings at that. There’s no way in hell I could ever cheer for a member of that team, and I’m not about to start now.

I’ll be the first to congratulate both when they retire and if/when they are inducted into the Hall of Fame. But until then, they’re no friends of mine. And they better expect plenty of boos. Go Pack.