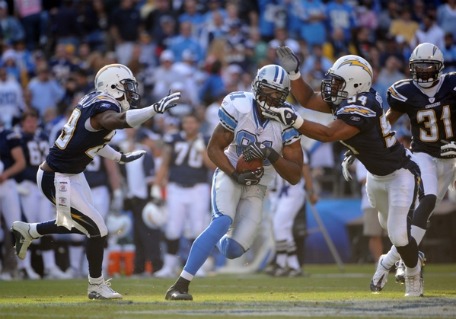 Well, I told you the Green Bay Packers were about to get healthy.

Detroit Lions quarterback Matthew Stafford and stud wide receiver Calvin Johnson both missed practice again on Friday. This was the second day Stafford has missed practice this week. Johnson hasn’t practiced at all. Both players are battling knee injuries and are unlikely to play on Sunday, according to MLive.

Essentially, this means the Packers will be playing a glorified scrimmage on Sunday. Daunte Culpepper will start at quarterback and Dennis Northcutt will pick up the slack at receiver. The Packers should win by about 85 and feel pretty good about themselves going into their game with the Cleveland Browns the following week.

The one thing that should not result from the Packers rolling the Lions is overconfidence. The Packers should win this game, and now, they should win by a large margin. A lot of problems the Packers have will be masked during the next two weeks by the quality – or lack there of – of their opponents.

So, look at these next two games as scrimmages against the NFL’s JV units. The Packers can use them to work on some of their issues, fine tune some of their faults, build some confidence and hopefully be firing on all cylinders when the Minnesota Vikings come to town in three weeks.