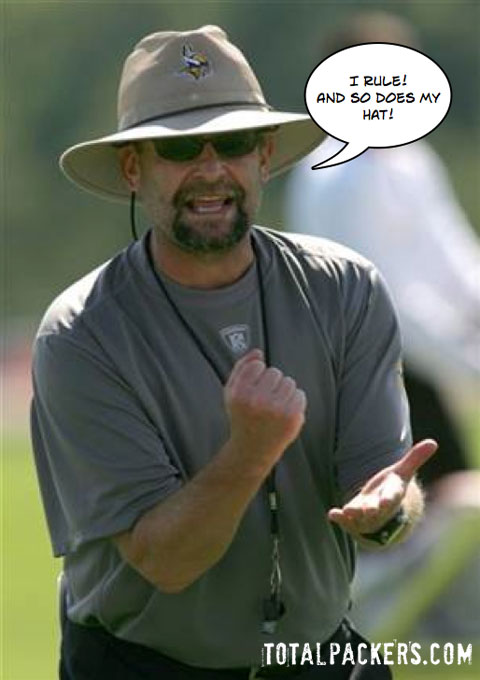 The list of really bad, downright stupid NFL head coaches is long, especially in recent years. Clearly setting themselves apart from the field are the Cleveland Browns Eric Mangini and the Washington Redskins Jim Zorn, whose combined list of blunders reads like a War and Peace of moronic decision making.

Then you have guys like the Oakland Raiders Tom Cable (reportedly punching an assistant coach, starting JaMarcus Russell) and former coaches like the masterful Rod Marinelli (0-16 Detroit Lions) and Romeo Crennel (you’ve seen the Coors commercials).

But no one has exemplified stupidity in the NFL head coaching department for longer than the Minnesota Vikings Brad Childress. If Childress didn’t have a luxury item named Adrian Peterson, someone capable might be coaching the Vikings by now.

Fortunately for the rest of the NFC North, particularly the Green Bay Packers, Childress is about to get a contract extension. CBS Sports’ Clark Judge reports that the extension will be done by mid-season.

The Vikings are 6-0 – their best start since 2003 – and the team’s ownership feels it’s time to reward Childress, who is in the fourth year of a five-year deal. Childress’ win total has increased in each of his previous three seasons – from six to eight to 10, last season.

Based on the stats, Childress deserves the extension. But as we’ve detailed on several occasions, Childress is prone to stupidity when it comes to personnel decisions (Tarvaris Jackson, anyone?), play calling, game management, opening his mouth, and so forth.

So by all means, go ahead and make that contract extension for as long as you want, Minnesota.

The rest of the NFC North applauds your judgment.

Everything the Packers Did to Improve At the Trade Deadline