Get To Know A Viking: Bizarro Brett

We all know about Brett Favre. Thanks to the breathless coverage and retellings of his life story over the past two decades, we know all about him.

We know his middle name is frickin’ Lorenzo. We know all about his family and his wife’s cancer survival and activism. Many of us can recite his accomplishments on the football field by memory. We know about his flaws – interceptions [cough, cough] and past addictions.

We know that he throws the ball real hard and “just likes to have fun out there.”

Away from football, we know that he is incapable of doing anything other than ride a lawnmower.

Brett Favre was royalty in Wisconsin and beyond. He was an ambassador and symbol for the sport of football.

So just who is this BIZARRO BRETT, the new quarterback for the Minnesota Vikings?

One of Superman’s strangest enemies was Bizarro Superman – a monstrous, deformed, shambling clone version of himself, created by his nemesis Brad Childress Lex Luther.

About two years ago, the Brett Favre we knew was replaced with a new version. A monstrous, deformed, and shambling imitation of Brett Favre. Bizarro Brett.

While he still receives the same fawning, ball cupping, knob slobbing, shaft stroking admiration from the NFL talking heads, this isn’t the same guy. Just like Bizarro Superman, something is off. His seems old, confused, selfish and petty. It’s definitely not the Brett Favre we knew. It’s Bizarro Brett.

Hopefully, people will see that the real Brett Favre is out there somewhere and that Bizarro Brett is really the devious half-assed creation of Brad Childress.

So, as our beloved Green Bay Packers prepare to face off against public enemy number one, I hope we were able to highlight some key differences between the real Brett Favre and Bizarro Brett – just so everyone understands that this… this… thing wearing purple is not the guy we cheered for for 16 years. This is not someone Packers’ fans should feel compelled to root for. Nor should they feel guilty for rooting against. True fans would understand – this is an abomination that needs to be PUT DOWN. 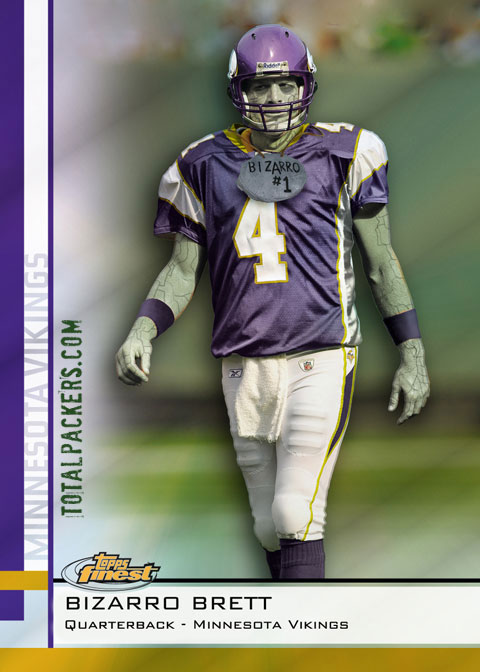