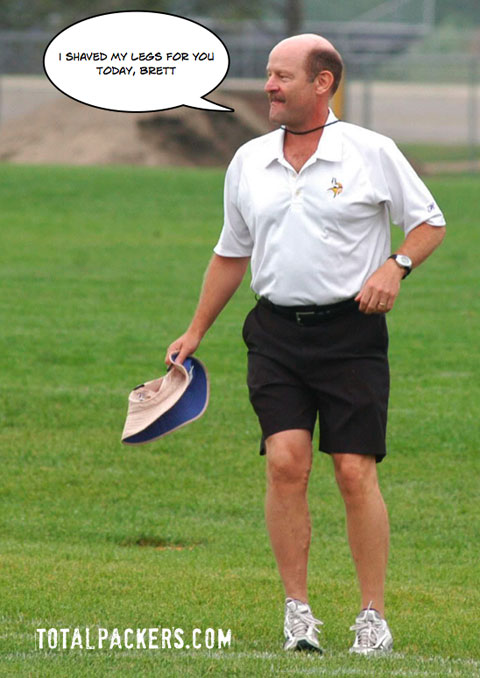 Minnesota Vikings coach Brad Childress is a lot of things.

How do I know this? Chris Mortensen said so, Sunday morning.

So coach Brad Childress dressed up like a female flight attendant, high heels, wig, blue hose, wig…and still a beard on the flight.

I’m told Childress had given a little lecture earlier to the team, reminding them to show the utmost respect to all flight attendants.

At least that would help explain Childress’ continued fascination with young boys.

Other than that, all I have to say is brilliant! And disgusting.

I just threw up in my mouth a little bit.

But I can totally see how dressing up like a woman would help all the idiots who play for the Vikings to remember to be nice to the flight attendants. Let’s face it, those scumbags have no manners, common sense, or decency.

I mean, without Childress, those Neanderthals probably would have tried to proposition those women for sex, or turned that plane into the scene of a gang rape.

When the Vikings landed in Pittsburgh, Childress decided to let Brett Favre throw the ball 51 times and Adrian Peterson run 18 times. It’s as if the entire NFL just got a little bit dumber.