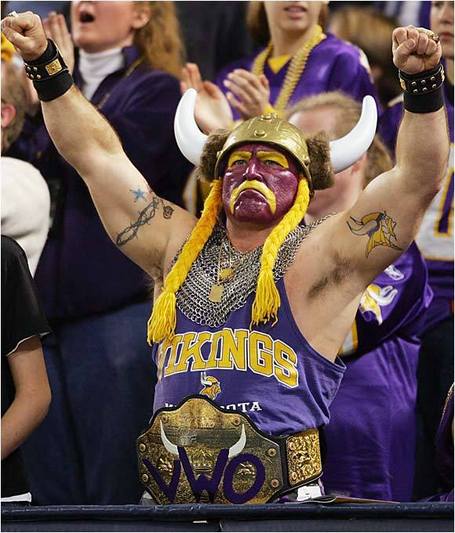 It’s something that we’ve always known here at Total Packers, but now other people are starting to figure it out. Who are the worst fans in all of pro sports? Minnesota Vikings fans, of course!

While we’re waiting for Ted Thompson to figure out who he’s going to cut (uhhhh… Jarrett Bush, maybe?), we thought we’d bring you this blurb out of Minnesota.

It appears despite the addition of one Brett Favre, the Vikings still have about 6,000 season tickets available. That, my friends, is fucking despicable. Kind of like I laid out in this post: The Difference Between the Packers and the Vikings.

ESPN Radio’s Waddle and Silvy show declared the Vikings fans “the worst fan base in all of America,” earlier this week.

ESPN’s Kevin Seifert then went on to point out the Vikings inability to sell out the Metrodome several times last season, including their lone playoff game, despite great players like Adrian Peterson.

The Vikings needed corporate help multiple times last season to avoid local television blackouts and also received two extensions from the NFL to sell out its divisional playoff game against Philadelphia. They have some of the most entertaining players in the NFL, including tailback Adrian Peterson and defensive end Jared Allen, and play in a stadium that requires less than 63,000 tickets sold to be considered sold out.

As usual, you disgust me Minnesota.