See what I'm getting at here?

I’m not sure where I was, or how I missed this announcement, but there is a Lingerie Football League.

This is presumably an offshoot of the Lingerie Bowl, which I can’t say I’ve bothered to watch. However, these lingerie/football people now have 10 teams and will play a full schedule of games.

That’s right: hot, half-naked broads running around, playing football and tackling each other. No word if cat fights break out, or bras and panties come flying off during the action, but I think both of these things are reasonable expectations.

Evidence does suggest that the “players” do make out from time to time. 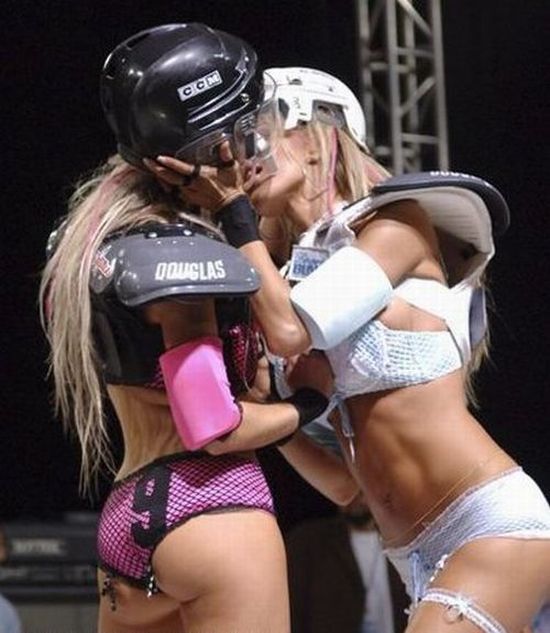 Not advised for NFL players.

I’m not really sure what would necessitate this sort of girl-on-girl action, particularly between players from opposing teams, but I can’t say I disapprove. I mean, the football fan in me says, “You would never see Greg Jennings making out with Antoine Winfield. Nor would you want to.” And then the fan of hot, scantily-clad broads in me says, [cracks open beer] “She is clearly just apologizing for committing that holding penalty downfield.”

I thought I would get to the bottom of this by researching the subject more thoroughly.

Here’s what we know. The teams play in NFL markets, with the exception of the Los Angeles Temptation (which is good for me, as I may have to go to a game to further my research). Unfortunately, there is no Green Bay team. Although, I don’t know a lot of women of this caliber who live in the Green Bay area. And ladies, when I say of this caliber, I speak from a strictly superficial point of view. Something tells me there probably isn’t a Nobel laureate or a Rhodes scholar among the bunch.

Anyway, there is a team in Chicago, as well as a few other cold weather cities like Philadelphia, Denver and New York. Unfortunately for us die-hard football fans, it appears these teams play their games indoors once the weather starts to cool down.

Might I make a suggestion here? Strictly as a football purist, I think we’d like to see these ladies play their cold weather games outdoors.

Oh yeah, there are also some rules and so forth to these games. If you’re really interested, you can check those out here.

What you may be more interested in, is this.

Unidentified broad from the Miami Caliente

Can you imagine Troy Polamalu pulling something like this off? I don’t think so!

I’ll always be a Green Bay Packers’ fan, but here is a home team I can really get behind, and I mean that strictly in the figurative sense. 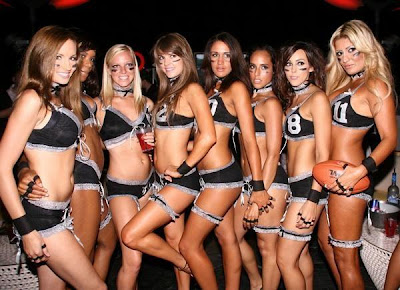 So, the great thing here is these “games” are played on Friday night, so they won’t conflict with your Saturday or Sunday football viewing. See, now you can watch football all weekend long if you so choose!

And hey, that’s what we’re here for: to contribute to your well being and happiness.