Has Favre Put the Packers On the Hot Seat? 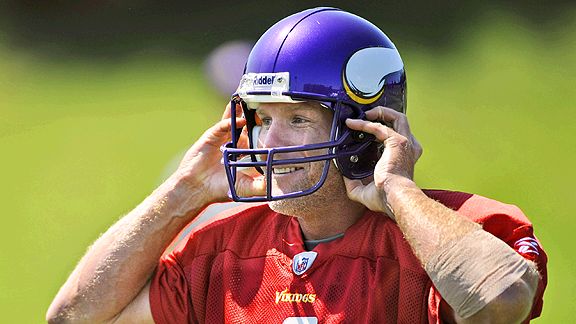 I am a pretty awesome guy! Yeah!

Sometimes, well… most of the time, no… all of the time, we wish Brett Favre would just keep his piehole shut. No, this has nothing to do with his aw shucks, good-ole-boy act or what he is or isn’t saying to Green Bay Packers fans.

This has to do with very serious consequences the Packers could be facing from the NFL.

In discussing his shoulder injury from last season, King Brett casually mentioned the fact that he told his former coach, Eric Mangini, about it during the season. The Jets didn’t list Favre on their injury report leading up to any of their games last season, even though Favre had a partially torn biceps tendon for the last four games of the season.

Favre should have been at least listed as probable by the Jets leading up to each of those games.

Big deal you say? Well, the NFL thought it was a pretty big deal, and they fined the Jets organization and Mangini $125,000 each, earlier this year. In an egregious case, the league may even take away a draft choice.

Now, without getting into a diatribe about why the NFL has such a specific injury report (read: gambling), rules are rules, and Favre should have been listed by the Jets.

Favre, or course, wasn’t happy about the fine on the Jets and Mangini, even though he was ultimately the one who brought it to the league’s attention.

So, earlier this week, Favre put the Packers in the league’s crosshairs, telling the Minneapolis Star Tribune there were plenty of other times he should have been on the injury report.

“I can’t tell you how many times I probably should have been on the injury report and was not. I practiced, I played, I knew I was going to play. But I wanted [the Jets] to know that I wasn’t too proud to play just to play.”

Since Favre was only injured for four games last season, that can only mean his previous team and coaches were also guilty of not listing him on the injury report.

Luckily for the Packers, the league apparently isn’t pursuing the matter as of yet.

So the question remains whether Favre, who termed the fines on the Jets “very unfair,” will continue ranting on about the subject and mention the Packers specifically. He certainly found no shortage of time to talk about his torn biceps tendon and how it limited him last season.

In fact, Favre talked about it enough times that the league was forced to do something of this manner. When Favre specifically said he told coaches he was injured last season, the league had no choice but to fine the Jets’ organization and Mangini.

What’s irritating about this whole situation is the fact that Favre is only harping on about his injuries as an excuse for his poor play towards the end of last season. While I don’t doubt that a torn biceps tendon might contribute to the poor play of a quarterback, this is getting a little narcissistic.

Is this the point of your career where you need to place blame in order to keep your legacy alive, Brett? No one expects you to have the same stuff you did when you were 25, except for maybe Brett Lorenzo Favre.

So how about this, Brett? Just shut the fuck up and play football.

Previous Article
Injuries Will Play Huge Roll for Packers the Next Two Weeks
Next Article
Packers Shape Up, But It’s Only the Rams