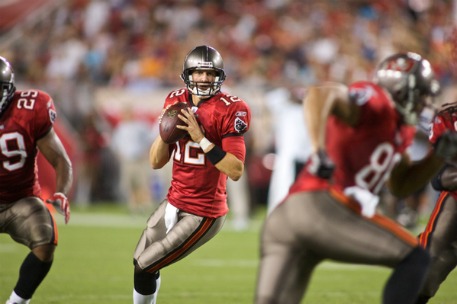 Luke McCown is available for cheap.

This should come as no surprise, particularly in the wake of Brian Brohm’s abysmal preseason performance (his second terrible preseason in a row), but the Green Bay Packers are seriously looking to acquire a backup quarterback.

Steve Wyche of NFL.com reports that the Packers could be looking to the Tampa Bay Buccaneers, something we suggested as a possibility last month. The Buccaneers currently have four quarterbacks on their roster – Byron Leftwich, Luke McCown, Josh Freeman and Josh Johnson. While all but Freeman, a first-round pick, are said to available, the Packers are most interested in McCown, according to Wyche.

McCown could likely be had for a player or a late-round draft choice. Alternatively, the Packers could wait and see who Tampa cuts, but they would have competition for McCown from several other teams if he’s released.

ESPN’s Kevin Seifert also mentions Kansas City’s Tyler Thigpen and San Francisco’s Damon Huard as possibilities. The Packers would have to trade for Thigpen, who performed well for Kansas City at times last year. The asking price would likely be a mid-round draft choice. As for Huard, there is a possibility he will be released.

Then, there’s always the question of who will be the odd man out in Minnesota. While it’s unlikely the Vikings would consider trading one of their backups to the Packers, they may have to eventually release one of Brett Favre’s caddies. Most likely, that will be either Tarvaris Jackson or John David Booty.

Brohm is a whopping 15-for-29 for 101 yards with 3 interceptions and 0 touchdowns this preseason. With Matt Flynn out with an injury for tonight’s game against the Arizona Cardinals, Brohm will get an extended opportunity to prove himself. If he plays poorly, it may be his last opportunity.