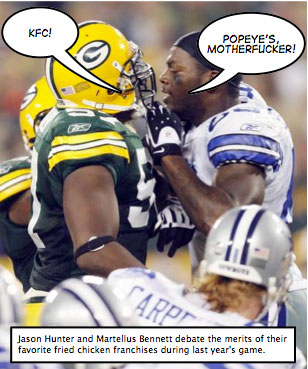 At first, I thought it was a joke, and then I read it. And then I wondered, how did this literary gold and scholarly social commentary not come across my desk sooner?

Yes, Bennett, a second-year tight end from Texas A&M, actually wrote a column with the title above. Before I get into the dynamics of the article, let me preface this by saying as a Irish man from the Midwest, I also love chicken – especially fried chicken.

If Bennett represents the best and brightest of Cowboys players – as one could reasonably assume since he writes for the Morning News – then it’s no wonder the Cowboys haven’t won a playoff game in recent memory.

In the column, Bennett ponders, not one, but two important race-related questions:

Why do black people love chicken is a question my white friends ask me constantly. Honestly I don’t know the answer to the question besides the fact that fried chicken is delicious. To find out more of what may be the reason black people love chicken I did a survey. And in return to my friends my question to them is why don’t black people come in the picture frames? You know what I mean the stock photos are always happy white families but I never see black families.

Bennett – also a master of punctuation.

Anyway, Bennett’s friends gave him such compelling answers as “it makes us run faster and jump higher,” and “because it’s greasey and black people use grease.”

Bennett himself concludes, and I paraphrase (only slightly) – fuck it, I’m going to Popeye’s.

I would point out the obvious issues with stereotypes, the problems they can cause, and the furor they can incite (just read the comments on Bennett’s fried chicken soliloquy), but we’re all smarter than that… except for Vikings fans who are all ignorant assholes, without exception.

Fortunately, the reason we like Max is because he was the first drunk to win the Super Bowl MVP and because he was usually soused by the middle of the third quarter when he called Packers’ games. It was not for his sensitivity.

If McGee made such a comment in today’s hypersensitive times I can’t help but think he’d be fired, and that’s a shame.