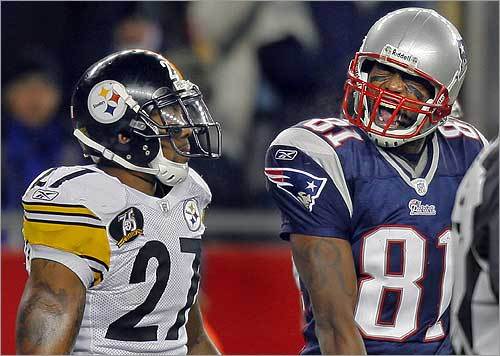 Anthony Smith after running his mouth about the Patriots.

Anthony Smith, whom the Green Bay Packers picked up as a free agent this offseason, may find himself in the hunt for a starting safety spot when training camp opens.

Smith has been lining up with the Packers No. 1 defense during OTAs, which means absolutely nothing other than last year’s starters, Atari Bigby and Nick Collins, are recovering from an injury and protesting his contract, respectively.

However, Smith could still figure strongly in the Packers defensive mix once the season starts. The reason: he is familiar with the 3-4 defense the Packers are running, having played in the Pittsburgh Steelers 3-4 for the past three seasons.

“He was the furthest ahead of anybody when we started this process,” Packers coach Mike McCarthy told the AP on Wednesday. “He looks very natural out there. He’s an athletic safety. I can see why people were as high on him as they are, and I think he’ll definitely factor in our safety group.”

While I am certainly not sold on Smith as the Packers starting safety (you’ll see why below), it could be an intriguing training camp battle.

The safety spots in the 3-4 are essentially interchangeable, with each man ultimately having to make adjustments as each play progresses, so between Smith, Collins, Bigby and Aaron Rouse, I expect to see the best two players on the field come week one. That is, the best two players who know the system.

In other words, new contract or no new contract, it’s imperative that Nick Collins show up for the start of training camp. Any holdout, and he’s really hurting his chances not only for a new contract, but for a starting spot on the Packers defense.

Smith’s best attribute, other than knowing the system, is his athleticism. It’s his brain that hasn’t always functioned properly.

Exhibit A: Before a 2007 game against the unbeaten New England Patriots, Smith makes this prediction:

Exhibit B: When the game came around, Patriots quarterback Tom Brady torched the Pittsburgh secondary.

Note: Smith is completely out of position on the Randy Moss touchdown, and he was burned badly on the Jabar Gaffney touchdown.

Warning: Really, really terrible music on this YouTube video, so turn your sound down or off.

Smith, however, seems to have learned a thing or two since then, thankfully. Packers safeties coach Darren Perry sees a more mature Smith, these days.

“You see a little more sense of urgency from him, realizing that ‘Hey, this may be my last opportunity. I don’t want to be considered a journeyman,’ if you will,” Perry told the AP. “After a while, if you start bouncing around, people aren’t going to look at you as a starter. They’re going to look at you as a backup-type player. If you want to change that label, you’ve got a great opportunity to do something about it.”

Keep an eye on the safety position when training camp starts.