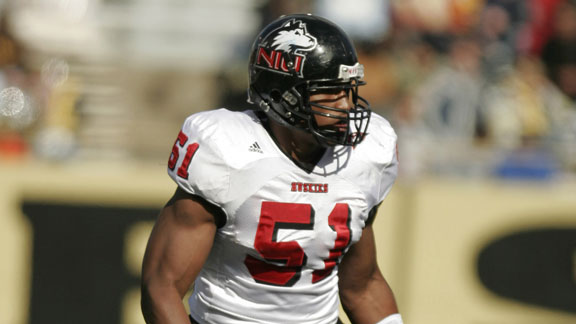 Who the hell is Larry English?

First, Crabtree is a phenomenal talent, racking up 1,165 yards in 2008 and an astounding 1,962 in 2007. He’s a physical specimen at 6-3, 214 who will only get stronger in an NFL program. And if you saw what was possibly the most exciting college football game of the 2008 season – Crabtree’s Red Raiders vs. Colt McCoy’s Texas Longhorns – you know what this kid can do on the big stage (10 rec, 127 yards, game-winning touchdown as time expired).

Still, 24 hours ago, the thought of the Green Bay Packers drafting Crabtree seemed preposterous. Receiver is the Packers’ deepest position with Pro Bowler Greg Jennings, former Pro Bowler Donald Driver, last year’s top draft choice Jordy Nelson, and former third-rounder James Jones, among others. Additionally – as I also mentioned yesterday – I didn’t see Crabtree getting by the Cleveland Browns, who own the No. 5 pick and appear ready to move leading receiver Braylon Edwards.

But hold the phone…

It now appears the Browns, who have been known to bungle a thing or two in their time, are no longer interested in Crabtree, having all but crossed him off their board, according to Tony Grossi of the Cleveland Plain Dealer.

The Texas Tech receiver brought a diva attitude on his visit to the club facility last week and did not impress coach Eric Mangini and others, an unidentified source told Grossi. In fact, Crabtree was described by some in the building as “not nice.”

Maybe Crabtree told the Cleveland brass they are an embarrassment of a franchise, which, while 100 percent true, is not nice at all.

Meanwhile, as quickly as we laughed off Nawrocki’s prediction yesterday, the writer sensibly defended his decision to slot Crabtree at No. 9.

If you look at Ted Thompson’s history, he is not afraid to go against the grain to select the best available player. You may argue, but there were more pressing needs when Aaron Rodgers and Justin Harrell were selected, Nawrocki writes.

… Donald Driver is 34 and does not have the same rapport with Aaron Rodgers that he had with Brett Favre; Greg Jennings is entering a contract season and may not be easy to re-sign with an agent (Eugene Parker) known for hardball negotiations and holdouts; James Jones came back down to earth with an injury-plagued sophomore season; and Jordy Nelson may be the future. From Ted Thompson’s perspective, drafting a receiver early may not be nearly as crazy as you think it is. Crabtree would be an excellent fit in a West Coast offense with his superb run-after-the-catch ability.

All of these statements are, of course, true.

On the other hand, the Packers really do have some pressing needs – much more so than they did in the years Rodgers and Harrell were drafted. The Packers were coming of a 10-6 season when Rodgers was selected and an 8-8 season when Harrell was picked.

This past season, the Packers sported a solid offense and one of the worst defenses (especially against the run) in the league.

That said, it would be hard for me not to select a guy as talented as Crabtree at No. 9, if he falls that far. Although, I imagine a lot of you will disagree.

Stay with me for a moment, though.

Defensive ends and outside linebackers – two of the Packers most pressing needs – are often found in the later rounds of the draft. As the Green Bay Press Gazette’s Pete Dougherty points out in his Day 3, Draft Preview video, this is an extremely deep draft for tweeners.

Of that group, Orakpo is likely the only sure-fire first rounder. Maybin could well go late in the first round, with Brown being an early-to-mid second rounder, and English a wild card.

The Packers could conceivably land their outside linebacker later in the draft, especially since it’s doubtful any of the aforementioned players warrant the No. 9 pick. But speculation is the name of the game, and just as Dougherty seemed to dwell on English’s potential in his commentary, SI.com’s Don Banks thinks the Packers could be looking at English at No. 9.

Just this week, I’ve heard all three names (LSU’s Tyson Jackson, Tennessee’s Robert Ayers, and English) mentioned as potential top 12 picks, with No. 9 Green Bay perhaps targeting English. All three of those names being called in the top 12 is probably a long shot, but it speaks to the reality that quality defensive linemen are always in short supply and subject to early round runs.

There seems to be strong interest on the Packers part (providing this isn’t a Ted Thompson smoke screen), but I think choosing a small school hybrid DE/OLB in the top 10 might be a reach even for Thompson.

One name that has also repeatedly come up in conversations as a possible Packers’ first-round selection is LSU’s Jackson. I don’t like Jackson for a lot of reasons, some of which I detailed in our initial draft preview.

To put it simply, I can’t see the logic in drafting for a 3-4 defensive end with a top-10 selection. If you look at the two 3-4 defensive ends that signed big free agent deals this offseason – Chris Canty with the New York Giants and Igor Olshansky with the Dallas Cowboys – neither has ever been a game changer. They are simply big bodies who hold up offensive linemen so speedy linebackers can make plays on the ball. In fact, it should tell you something that Dallas let Canty go to the Giants only to replace him with Olshansky – guys like these are essentially interchangeable parts.

While the Journal Sentinel’s Bob McGinn seems enamored with Jackson (as well as B.J. Raji, who I also picked apart yesterday), even his sources find holes in Jackson’s game.

“He doesn’t run great and some of his instincts I worry about, but he’s certainly heavy enough to play the run,” an AFC personnel director told McGinn.

While the NFL is currently in love with defensive lineman, and Jackson may fit the mold the Packers need, you can also find these big bodies later in the draft.

Crabtree is a stud who can change the game, and if the Browns wise up he won’t be available at No. 9. English is a raw and unpolished project with potential – Ted Thompson and Mike McCarthy’s favorite word. Tyson Jackson is an interchangeable part – Vonnie Holliday, at best.

So, make me proud for once, Ted.