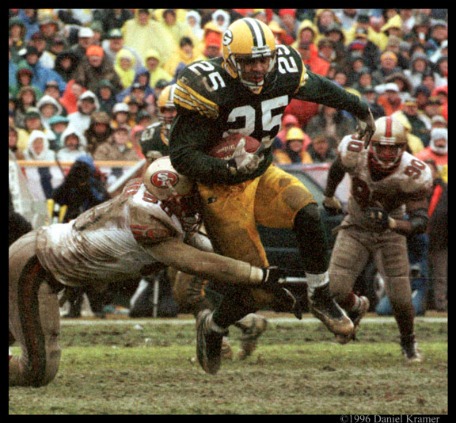 His mother was a mudder.

Today, I thought I’d put out some good news, in the midst of all the bad, pissing and moaning, etc. And so…

First, I will say that I don’t watch the Pro Bowl. It bores me. It’s after the season, when I am about footballed-out (if that’s possible). Frankly, if there isn’t a full team of Green and Gold on the field, or it isn’t a playoff game, I’m just not interested.

Still, it’s an individual honor that I like to see Packers’ players receive. A pat on the back for a job well done.

And so, Charles Woodson and Nick Collins were announced as starters for the NFC squad, yesterday.

Both are well-deserved selections. Each player has five interceptions, which ties them for the NFC lead. Collins has returned three of those picks for touchdowns, and Woodson has scored twice.

At one point in the season (Read: when the Packers were winning), I thought Woodson had a legitimate shot at earning the Defensive Player of the Year nod. He was playing that well.

When the Pro Bowl rosters were announced, it got me thinking – where the hell is Greg Jennings? He of the 1,153 yards, 16.7 average, 8 touchdowns, and huge play potential?

Well, he is a first alternate. That’s where he is.

It’s hard to argue with any of those selections ahead of Jennings, especially considering they all play on winning teams.

So then, I said to myself, what about Aaron Kampman? He of the 9.5 sacks, 53 tackles and the no-stop motor?

OK, hard to argue with those too. Although, I will say, that there should be a no scumbag rule put in place for the Pro Bowl, so shitbricks like Allen couldn’t be invited.

On a final note, there is an interesting read at National Football Post about how the players like to muck up the system when they do their voting. Pro Bowl voting consists of 1/3 fan, 1/3 player, and 1/3 media input.

When I was a Redskin, we would break into groups by position. As a collective unit, we would talk, discuss, complain and figure out whom we wanted to play in Hawaii after the Super Bowl. Only one rule really stood out: NO COWBOYS.

I wonder if our guys voted for any Queens? If they did, I say they should be cut, immediately.

The Packers announced today that two players from our last set of glory years are being inducted into the Packers Hall of Fame – Antonio “Stone Hands” Freeman and Dorsey “Dorse the Horse” Levens.

This excites me, mostly because I watched both guys for their entire career, and, because the Packers kicked some major ass in those days.

Dorsey was a hard-nosed runner with soft hands, much like Ryan Grant SHOULD be today. He was also unselfish, having split time with the indomitable Edgar Bennett for part of his career. Mostly, he was a winner.

Freeman, on the other hand, I had a love/hate relationship with. He teamed with Robert Brooks to form one of the Packers best receiving duos ever. In my mind the only comparable duo was Walter Stanley and Phil Epps… just kidding… James Lofton and John Jefferson. Freeman could be infuriating – balls would hit him in the hands and miraculously bounce off (hence the Stone Hands moniker). On the other hand, he could be spectacular.

One play I will never forget – and it’s a play that I can remember exactly where I was, who I was with, what we were doing (it was that good) – is the Monday night diving catch and touchdown run against the Queens.

Congrats to our boys!