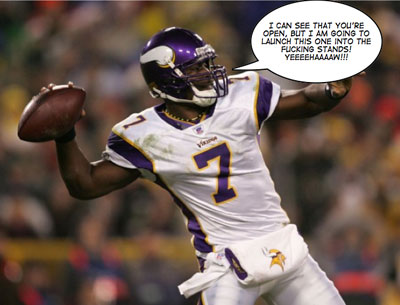 It’s hard to find silver linings in the 2008 NFL season lately, but the misfortune of the Green Bay Packers’ sworn enemies definitely qualifies.

First, to Dallas, where the Cowboys are getting ready to implode because of guess who? The ubiquitous Terrell Owens – who else?

It seems that TO isn’t on the same page with quarterback Tony Romo, and has even expressed resentment towards him.

Sound familiar? It should. Owens’ relationship with his two previous quarterback, Jeff Garcia and Donovan McNabb, led to his departure from San Francisco and Philadelphia.

Honestly, I have to wonder what took Terrell so long to muck things up in Dallas. He’s definitely getting soft in his old age. I’m sure we all remember his “that’s my quarterback” performance after the Cowboys lost to the Giants in the playoffs last year, but just in case…

And so now TO isn’t happy that tight end Jason Witten is getting the ball more than he is. ESPN goes so far as to say that TO is jealous of Witten and Romo’s relationship, and that they are drawing up plays in the dirt without him.

And surprise! TO’s schtick is wearing thin on his teammates.

“He’s insecure about it. The thing that bothers me more than anything about this problem is that it’s always something with him — San Fran, Philly and here; always something. And he brings other people into it. You know, he talks to Sam Hurd and Roy Williams, who just got here and doesn’t really know these guys. TO talks to him and so now he probably thinks Witten politics with Tony for the ball,” an unnamed player told ESPN.

And so, on to Minneapolis we go, where Gus Frerotte has gone down with an injury, and will miss one or two weeks. And as you know, that clears the way for Total Packers favorite, Tarvaris Jackson, to return to the lineup!

You may remember Tarvaris from such films as “46% Completion Percentage – Gettin’ er Done!,” and “The Man Who Hands the Ball to Adrian Peterson.”

The Vikings travel to Arizona this weekend, where I predict they lay a big, fat turd.

Previous Article
Predictions: Packers vs. Jaguars
Next Article
One Less Thing For Packers To Contend With