Here’s One For The Idiot Files

And who does it go to? My main man, Ted Thompson.

Word over at the NFL Network is that the much talked about Aaron Rodgers contract extension didn’t get done by the close of the NFL day on Monday.

So what, you say?

Well, when I questioned the timing of the contract extension last week – you know, $65 million to a guy who has now started for exactly half a season – I also pointed out that if the extension was done before November 3 (Monday), that a large portion of Rodgers’ guaranteed money ($20 million) could be counted against this year’s salary cap – which the Packers are approximately $20 million below.

What this means is, that if for some reason Rodgers fails to perform, has a career-ending injury or something else horrendous, the Packers could cut their losses, let Rodgers go anywhere down the line and owe him little to no money, since a large part of that guaranteed portion of the contract would be eaten up under this year’s salary cap.

Well, any increase Rodgers receives on this year’s salary will be prorated over the length of his contract (which runs through 2014), like a signing bonus. 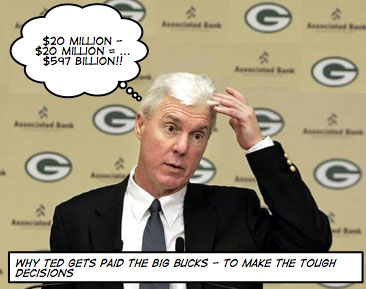 Well, with the same amount of zeal that I jumped all over Big Ted this morning, I will now… wait… no, I still think Ted is a pompous ass…

But anyway, it appears that Rodgers’ contract DID get done ON TIME – it was done November 1, to be exact.

A website that team’s use for players contracts did not have any postings of the Rodgers’ contract until midday Tuesday. But once it was posted, the contract was dated Nov. 1, so Rodgers’ new six-year, $65 million contract beat the deadline and will save the Packers $2 million a year against the salary cap for the life of the deal that runs through 2014.

Whatever that means. What’s important, is that the Packers save the money against the salary cap that getting the contract done before the Nov. 3 deadline was meant to do.

Get to Know a Viking: Ragnar

Get to Know a Viking: Ragnar