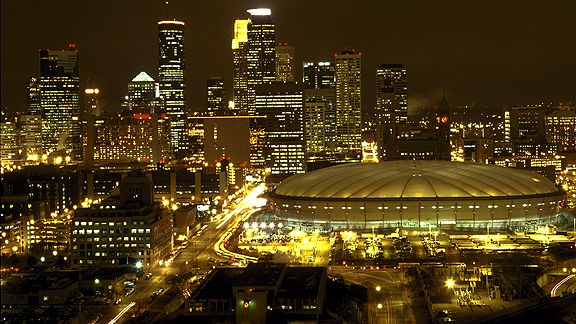 The Metrodome almost looks useable in this photo.

Forbes recently listed the top 10 professional sports franchises most likely to move, and included on that list were the Minnesota Vikings.

This is really nothing new. The Vikings have been playing football in a piece-of-shit stadium for years now, and despite overtures, have been unable to secure financing for a new one.

Local taxpayers voted down a study last spring to look into public subsidies for a new stadium to replace the outdated Hubert H. Humphrey Metrodome (opened: 1982). That means the team will have to dig into its own pockets for a new venue–or possibly hit the road.

People in Minnesota are cheap… not to mention ignorant, but that’s another story.

Anyway, I’m getting off topic. How would I feel if the Vikings left Minneapolis?

First, I guess I would have to turn the full brunt of my hatred for idiot fans of sub-par teams towards Chicago, and Chicago certainly doesn’t want that.

Really though, I remember when Tampa Bay left what was then the NFC Central. While I always enjoyed the “Battle of the Bay,” especially since Tampa was usually the only team worse than the Packers in the division, it made geographic sense to move the Buccaneers to the NFC South. Further, there was no sense that a great tradition was being lost – like if the Cowboys stopped playing the Redskins twice a year, or the Packers stopped playing the Bears, Lions, or even, yes, the Vikings.

God save the Queens.