I Am The Walrus, And I Am Pissed! 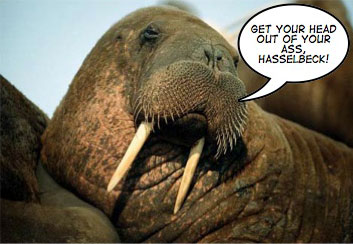 I’ve always thought Mike Holmgren has somewhat resembled a walrus. I think it’s the big, bushy mustache and the chubby face, but I digress.

Holmgren, or The Walrus – whichever you prefer, is pissed.

It seems he laid into his Seattle Seahawks team on Wednesday, telling them exactly what he thought about them, in what is being deemed a “truth session.” On a side note, I’d really enjoy having a truth session with Ted Thompson.

Anyway, Seahawks quarterback Matt Hasselbeck had this to say about the ass reaming handed down by The Walrus.

“He’s definitely tense, there’s no doubt about that,” Hasselbeck said in a conference call to reporters in Green Bay. “Mike got up today and really laid into the offense. I mean, he gave it to us hard today.

“That was tough to take.”

I guess that’s what you get when you suck, Matt. Unless, of course, you play in Green Bay, where lack of production is blamed on trying too hard.

It’s good to see that The Walrus still has the fire. I like that he “gave it to them hard.” I wonder what that felt like?

It’s also good to see that the Seahawks (1-3), who the Packers meet in Seattle on Sunday, are about as shitty of a football team as the beloved Green Bay Packers.

The Walrus’s team was embarrassed by the New York Giants last week, losing 44-6, the largest margin of defeat in The Walrus’s career. The Seahawks’ defense has given up 34 points to Buffalo and 33 to San Francisco – neither team exactly an offensive powerhouse – in addition to the 44 the Giants dropped on them. The team’s only win of the season is against the lowly St. Louis Rams (0-4).

Seattle ranks 27th in the NFL in total defense through week five, one position lower than the Packers.

Despite that, The Walrus seems to have focused his tirade on the offense – one that ranks 22nd in the NFL, and is averaging 299 yards per game.

The real problem, as identified by The Walrus himself, is third down conversions. The Seahawks are converting only 29 percent of their third downs, which is 29th in the league. Only Detroit, Oakland and St. Louis are worse. The Seattle offense also ranks near the bottom of the league (24th) in time of possession.

It all adds up to a crappy offense leaving a crappy defense in a crappy situation. All in all, it’s pretty crappy, and that means the Packers have a chance this weekend, if they can run the ball better than they have been, control the clock, and keep their crappy defense off the field.

If I were Mike McCarthy, I would consistently play eight men in the box and dare Seattle, who has three receivers on injured reserve and another – Deion Branch – out indefinitely, to throw the ball.

Then again, the Packers’ game plans haven’t always made sense this year.

Let’s see if the light bulb comes on over McCarthy’s head, and let’s see if The Walrus’s tirade makes Seattle play better or worse.

Green Bay Packers – Not Even Average