Brett Favre, You Are Dead To Me 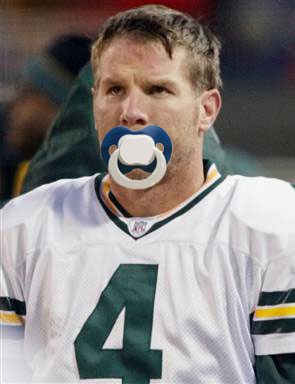 Blinded with rage, is about the best way I can describe the way I feel about the latest Brett Favre drama.

I know what you’re thinking – the greatest Packer ever would do no such thing to his former team. Well, think again. Glazer, who is no lightweight NFL reporter, got the info from several sources and says Favre spent over an hour on the phone with Lions’ coaches, after being connected by good buddy and since disposed Lions’ GM, Matt Millen.

Jason Wilde, a writer for the Wisconsin State Journal, confirmed Glazer’s report with his own sources.

Two league sources said Sunday they had been told of Favre contacting the Lions last month, before Glazer’s report. One said the report was “absolutely” true.

Apparently, the information sessions were not only limited to the Lions, although others were not as in depth.

Other teams the Packers have played had also heard about the Favre coaching clinic with Detroit. In addition, there have been rumors that Favre has spoken to other teams giving them information, but most of those teams insist they have not heard from the famed gunslinger.

However, another team says it has had casual talks in the past with Favre and talked about some of what Green Bay does, but it was nowhere near the details he let loose to the Lions.

Glazer stood by his report on The Jim Rome Show on Monday:

Most importantly, Glazer said that he stands by the story “1,000 percent.”

Predictably, the Packers weren’t too happy.

“You know, I don’t respect that,” Packers cornerback Charles Woodson said, according to the Green Bay Press-Gazette. “If they call him and he gives them information, that’s one thing. But to seek a team out and feel like, I guess, you’re trying to sabotage this team, I don’t respect that. I know he’s been the greatest player around here for a long time, but there’s no honor in that.”

Favre, meanwhile, denies the whole thing. It was later reported the the denial was in the form of a text message to SI’s Peter King, which reminds me of the time Favre texted another reporter denying rumors about his comeback, before it was revealed that he wanted to come back all along.

First, let me establish that Brett did nothing against the rules in giving the Lions, or anyone else, information about his old team.

What this shows us, is the real Brett Favre. He may still be the guy who threw all those touchdown passes, but he’s now revealed himself for the truly selfish, arrogant, deceitful, whiny prima donna that he is.

There were hints of the selfishness and jealousy during his comeback this past summer and the subsequent trade to the New York Jets, but this is sad, especially considering the Packers’ organization and community supported him through drug and alcohol addiction, marital problems, deaths in his family, and his wife’s breast cancer ordeal.

How soon we forget.

Never once did we question the great Favre or his motives, and how does he react when the Packers decide it’s time to turn the page? Like a spoiled child.

Get over yourself, asshole. It’s time to let it go.

Mike Florio puts it into perspective at SportingNews.com.

If the reports are true, Favre’s actions represent the machinations of a deeply-troubled mind. It’s one thing for Favre to dislike the members of the team’s front office or coaching staff. It’s quite another for him to go out of his way, at a time when he should have been doing anything and everything in his power to prepare for his new team’s Week 2 game against their arch-rivals from New England, to try to hurt the franchise that provided him with the canvas on which he worked all those masterpieces.

Brett Favre, you are classless.

Brett Favre, you are a scumbag.

Brett Favre, you are dead to me.