Packers Not As Good As We Thought 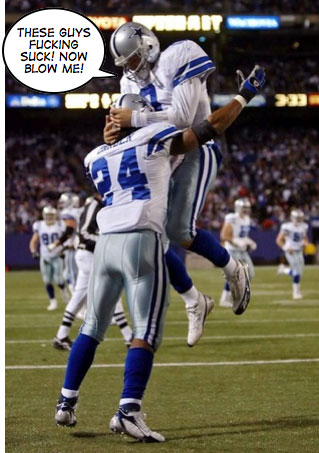 The class of the NFC, the Green Bay Packers are not.

The Dallas Cowboys made sure of that, with a thorough 27-16 victory last night at Lambeau Field. Pretty simply, the Green Bay Packers played some bad football.

Other than the stellar play of cornerback Charles Woodson, who held one Terrell Owens to two catches and 17 yards, Greg Jennings, who hauled in eight receptions for 115 yards, and kicker Mason Crosby (10 points) the Green Bay Packers looked like a pretty average team against Dallas’ superior talent.

Aaron Rodgers was sacked five times. The Packers defensive line let Marion Barber run for 142 yards and a touchdown and his backup, Felix Jones, run for 76 yards on six carries, and a touchdown. The secondary gave up two long receptions to some guy named Miles Austin (?!?!?!) that resulted in 115 yards and a touchdown. Cowboys quarterback Tony Romo continuously had all day to throw the ball and often found tight end Jason Witten, who had four third down conversions among his seven receptions.

The Packers also got out coached, which seems impossible considering that Dallas’ coach is none other than Wade Phillips. However, the evidence is there to suggest it. There were several blown assignments in the secondary (see Miles Austin, above). The Green Bay running backs ran the ball a total of 16 times, and Dallas out gained the Packers on the ground 217 to 84. Finally, the penalties continue to pile up, as the Packers committed eight for 68 yards. The first and last item are coachable. The second item is a flawed game plan.

Now that the Packers have been brought back to earth after a 2-0 start, the question is, are this year’s version of the Green Bay Packers good, or just mediocre?

The Packers first two victories of the season came against an obviously average Minnesota team and Detroit, which is already competing with Kansas City and St. Louis for the top overall draft choice in the 2010 NFL draft. Meanwhile, the Packers were roughed up against the most talented team in the conference – at home.

Next week’s game at Tampa Bay will go a long way towards answering the question.

Why We Hate The Cowboys

Al Harris May Be Gone For The Year

Al Harris May Be Gone For The Year