From out of left field, the Green Bay Packers punter of last season and the only one in camp for most of this year, Jon Ryan, was cut yesterday to make room for former Washington Redskins’ punter Derrick Frost.

Also cut was linebacker Abdul Hodge, who had a pretty nice training camp and showed real potential as a playmaker, but more on him later.

Ryan more or less sucked it up in the two preseason games I saw him punt in this year, and throughout his career has demonstrated a continually frustrating ability to not be able to land a punt inside the opponent’s 20, instead opting for the check-out-the-big-leg-on-Brad route of pounding the ball right through the end zone. Nonetheless, Ryan did manage to put up decent numbers last year, including a gross average of 44.4 and a net of 37.6. Those were good for ninth and 11th in the league, respectively. Compare those to the numbers of the Packers new punter.

Frost’s gross of 41.0 (28th in the league) and net of 36.4 (22nd) don’t really stack up. The Packers have taken a guy who can pound the ball and traded him in for a guy who can put the ball inside the 20. Frost has put 97 punts inside the opponent’s 20-yard line over the past four years.

Which will help the Packers more in the long run? It’s debatable, but I would tend to lean towards the guy with the bigger leg and experience punting in Green Bay. I still have nightmares of Josh Bidwell, who couldn’t seem to punt in cold weather, and, inconsequently, only had one nut.

Also, the Ryan move was a little surprising, especially considering the Packers seem to have a few bigger issues to worry about than punter.

Like, hey, Big Ted, aren’t there any offensive lineman out there to bolster what seems to be a pretty beat up and inexperienced (read: bad) group?

Or, hey, Teddy, what is Jarrett Bush still doing on the team, when you just cut a guy like Hodge who demonstrated the ability to actually make positive (that’s the opposite of negative, Ted) plays during the preseason?

You know, Ted-O, what are we going to do about that backup quarterback situation. I mean, Aaron Rodgers hasn’t demonstrated a penchant for durability during his career, ya know?

Oh, wait… we got that answer too.

Rather than make a play for someone like Chris Simms, who has shown he can win a game or two and was released by Tampa Bay on Saturday, the Packers have decided that two rookie quarterbacks are the answer. Mercifully, the decision to make Matt Flynn the No. 2 guy was finally made, despite the fact that second-round pick Brian Brohm was given every chance to be the guy this preseason. In each opportunity, Brohm promptly crapped in his pants, finishing the preseason a whopping 19-of-42, for 155 yards, 0 touchdowns and 1 interception.

Meanwhile, the unheralded seventh rounder, Flynn, quietly went about his business and even flashed some ability, finishing the preseason 27-of-42, for 209 yards, 3 touchdowns and 0 interceptions.

Congratulations to the Packers brass for making the right (actually, it was a no-brainer, you stubborn assholes!) call on the backup quarterback. Now, the question is, do you really want to go into the season with a seventh-round draft choice one snap from being responsible for leading the team into the playoffs?

I sure as hell don’t. 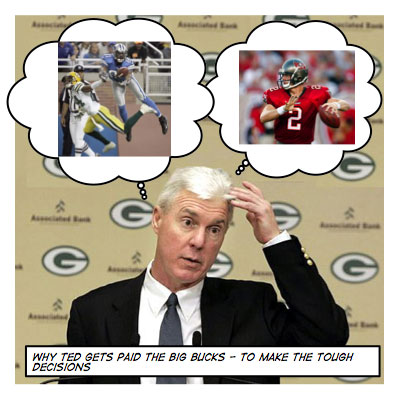