Wynn Returns to Practice And Gets Cut, Harrell Injured Again

And so the DeShawn Wynn era in Green Bay has come to an end.

No sooner did the running back, who started four of the Packers’ first seven games before going on injured reserve last year, return to practice (yesterday) from his latest injury than he got the ax (today).

Inexplicably, cornerback Jarrett Bush is yet to be cut.

The other interesting development is that defensive tackle and former first round draft choice Justin Harrell was placed on the physically unable to perform list.

He can’t be placed on the active roster during the first six weeks of the season. At that time, Harrell would be eligible to practice with the club for up to three weeks before the team can choose to activate him.

I thought it was a risk at best and a mistake at worst to draft a guy with Harrell’s injury history in the first round. I was hoping we’d take a flyer on Brady Quinn and let him duke it out with Aaron Rodgers for post-Favre glory.

Harrell tore a bicep during his senior season at Tennessee and played in just three games. As a rookie in Green Bay, an ankle injury shelved him for five games. This was after he sat out most of the offseason and preseason. Now, he’s out for at least six games to start the 2008 season.

Anyone see a pattern here?

Ted, what the fuck were you thinking?

It’s beginning to look like Harrell is going to go down in Packers infamy with other first-round beauties like Ahmad Carroll (thanks Mike Sherman!), Ron Wolf duds Jamal Reynolds and Antuan Edwards, and the greatest bust of all time, Tony Mandarich. 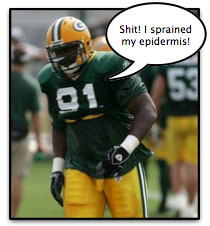 Update: Big Teddy gives us the nugget that Harrell is having the same medical procedure performed as the last time he was injured… only different.

That makes me feel totally better, Ted. Thanks, buddy!

Previous Article
Postcards From San Francisco
Next Article
Get To Know A Viking: Jared Allen