We all know that Minnesota Vikings’ fans are classless scumbags, which is largely due to long-standing societal problems in Minnesota like inbreeding, low education standards, general angst associated with having a mate that weighs over 200 pounds, and lack of Super Bowl trophies.

Today, that fact was once again confirmed when I was banned from a Minnesota Vikings’ forum. First, you’re probably wondering what I was doing trying to have an intelligent conversation about sports with a group of people that couldn’t have an intelligent conversation about the color of grass. Well, I was trying to bait them, by posting a link to our blog – specifically, Steffen’s spot-on profile of Jared Allen.

Apparently, they didn’t like the shiny lights, because today when I went back, I got this message:

Ironically, I spent a good hour looking through this forum, and while most of the posts were mouth breathers talking about how they can’t wait to crush Green Bay next week, there were some posts containing links to other sites, even a couple to Packers’ forums, which also enticed said scumbags to stop by and talk about how Daunte Culpepper is the greatest quarterback of all time, their dreams of being tea-bagged by Brad Childress, and delusions of hoisting a Vince Lombardi trophy.

Apparently, I surpassed the maximum IQ level to be allowed to participate on the forum. I also did not warrant an email to tell me I had done something wrong, but that is not surprising. Judging by the grammar on some of the posts, most of these people are still learning to type.

So, by all means Purple Pride, feel free to carry on with your circle jerk without me! Sorry for trying to class up the joint. 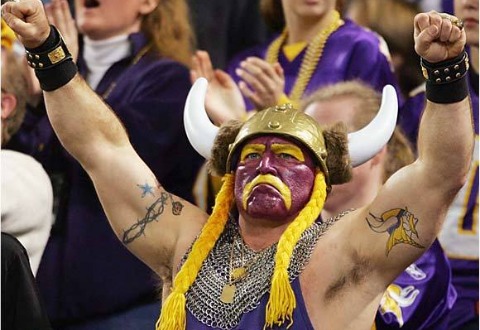