The Packers’ Other Quarterback Debacle 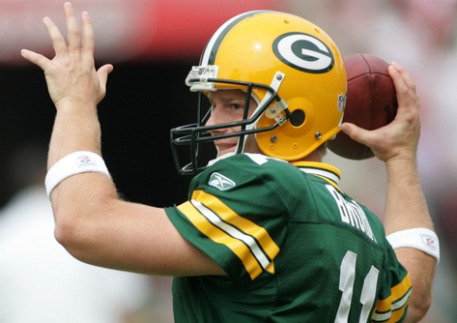 Brian Brohm: not as advertised.

If it were any other preseason, there would probably be a lot more discussion about Brian Brohm’s turd of a training camp.

Thankfully for him, the spotlight has been fixed squarely on Aaron Rodgers and Brett Favre. But in any other year, there is no way a highly-touted second round draft pick like Brohm would get a pass from the media after such a shaky camp.

He’s looked lost at times, completely unprepared. He holds the ball too long and consequently he has been sacked. A lot. This guy would have been the first QB taken had he come out early last year.

A lot of Favre supporters said we should dump Rodgers in favor of keeping Brett around another year or two to groom Brohm. I thought that was a bad idea then and Brohm did nothing during the preseason to change my mind. I’m not rooting against him. I hope he gets better.

Last night’s performance solidified it for me. Matt Flynn should be the Packers number two. Not only did he outplay Brohm again, he actually displayed an arm, mobility and on that last drive… a certain gene se qua reminiscent of a certain young somebody.

Watch the highlights and see for yourself.

I know, I know, nearly every player on that field will be out of a job by this weekend, but that throw showed something.

Previous Article
Today I Was Banned From a Vikings Forum!
Next Article
Minnesota Tackle Suspended Four Games Without Pay